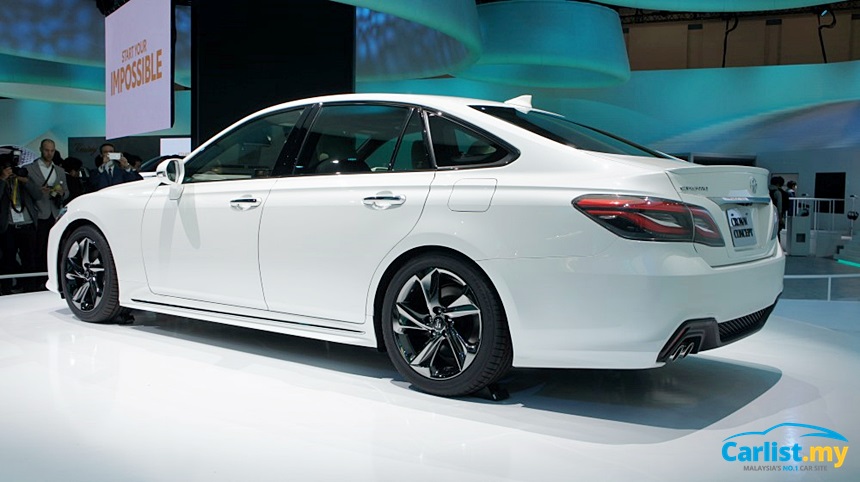 The reason I liked it, is because it looked different than the mainstream Toyota products.

Join Date: Jan 2012
Posts: 5,401
Re: 2017 Tokyo Motor Show
Quote:
Originally Posted by Andrew L View Post
That Mazda is beautiful. Not a fan of the interior since it's so minimalist but I know that's what Mazda is going for these days so it fits for them, I am just personally not a fan of that kind of stuff.
I really love how minimalist the interior is! Give me some sweeping architectural lines along with minimal decoration, a natural beauty over the caked on makeup that passes for beauty 90% of the time!
SP1966 is offline
Quote Quick Reply
post #23 of 28 (permalink) Old 10-25-2017, 05:18 PM
AM222
Ford Falcon It's powered by a 1.0-liter turbo, a 1.2-liter gasoline-electric hybrid is optional.


Join Date: Dec 2012
Posts: 866
Re: 2017 Tokyo Motor Show
Lexus LS+ is overdesigned. Too much of a not-so-good thing despite great elements. The top flagship sedan should be a bastion of good, tasteful design. The Mazda, similarly bold is restrained and elegant. Only the lower-rear side body bulge is overly wrought. BTW, do I detect a hint that RWD is in Mazda's future plans?
falcon lover and 2b2 like this.
glyphics is offline
Quote Quick Reply
post #25 of 28 (permalink) Old 10-28-2017, 06:39 PM
2b2
Mercury C557

NetCarShow: Mazda Kai Concept
"The Mazda Kai Concept compact hatchback heralds a new generation of Mazda cars. Featuring the next-generation SKYACTIV-X gasoline engine, SKYACTIV-Vehicle Architecture and a more mature expression of the KODO design language, the model embodies the technology, engineering and design concepts that will define the next generation of Mazda cars. Refinements in all areas of dynamic performance have produced a dramatically quieter, more comfortable ride and an enhanced performance feel. The Mazda Kai Concept features muscular, solid proportions and its form is brought to life by a delicate flow of reflections over the body sides."

Why the Long Hood? Three Questions for the Mazda Kai’s Chief Designer
How Mazda plans to stand out from its competitors
MotorTrend/36 Photos - Edward Loh - October 26, 2017

At the 2017 Tokyo Motor Show, Mazda revealed the Kai concept–a sleek and sculptural stunner that clearly signals what the next-generation Mazda3 could look like. We spent 30 minutes with Kai concept designer, Yasutake Tsuchida, who is a god amongst Mazda fans for leading the exterior design of the mind-blowing Furai concept back in 2009.

Tsuchida opened by asking us to consider the RX Vision sports car concept (that debuted in Tokyo two years ago) and the Vision Coupe concept (which debuted alongside the Kai) as bookends, with the Kai concept positioned in between–but closer to the RX Vision. This despite both of the Vision concepts’ long hoods, pushed-back green houses, and exaggerated dash-to-axle ratios. What do rear-wheel-drive sports car proportions mean for the future of Mazda’s front-drive compact? We queried Tsuchida-san.

MT: Why are Mazda’s latest concept cars focused on exaggerated rear-wheel-drive proportions when the majority of the production cars are based on front-wheel-drive platforms?


YT: “So first of all, I’m going to say that I’m not the Vision chief designer, so it is very difficult for me to get into detail on that!” (laughs)

“But I would say this, the Vision that you saw is the ideal of what we have in terms of the design–whether this becomes commercialized, whether it becomes a production car is something we have to investigate. From the perspective of design, we must also have an ideal that we aspire to. This is really an expression of what we feel, directly, that we should be pursuing.”

“I think what is important for us is that when you compare the Kai concept and coupe, and I hope you felt this, the expression style is different, the proportions are different, but I think there is an underlying consistency between the two. It’s what gets you to say, when you look at the car, “Yeah, that’s got Mazda in it.”

“Because of this consistency, I don’t think that there is going to be such a huge gap between what you can expect and what we are showing.”


MT: Mazda’s last three concepts, RX Vision, Vision Coupe, and Kai, are all very sculptural, and your new design language stresses minimalism. But your much larger home rivals–Toyota, Honda, and Nissan–are doing much busier designs, with character lines everywhere and often awful executions of “floating” roofs. How is it that Mazda is able to stand apart?


YT: “I think for us, with only 2 percent market share globally, we can’t be doing the same things as the main players. We have to think about how we can stand out; that’s why we came up with the Japanese aesthetics and really honing down to beauty through subtraction. That’s the method that we’ve adopted to stand out from the rest.”

“What we’ve looked into when we talk about Japanese aesthetics is that when you keep things as simple as possible, the understatedness is something, which in turn, gives you more depth. I’m hoping that people will be able to feel this intuitively in our design.”

MT: Does this philosophy come from the executive leadership of Mazda? Do you have support from the top down? Surely there are executives who don’t understand design and ask you to add more “stuff” like your larger rivals have?


We will see how much of this trust, sculptural minimalism, and frankly sexy proportionality makes it to future Mazda vehicles.
.
.
To view links or images in signatures your post count must be 0 or greater. You currently have 0 posts.

You Tube
no, it's not a model Name afaik - just the sound-fx to let you know one's about to run-you-over...
...not very loud at all on my puter

Quote:
Originally Posted by article
...As the video portrays, decelerating and accelerating warrant different tones, but the brand says it will make other tones when the driver selects reverse, for example. Sound engineers also worked to ensure the sound isn't too audible so it won't disturb onlookers as the car passes by. It's simply enough noise to alert pedestrians of the electric car's presence. Canto doesn't kick in until around 12 mph either...

...yeah a ton & a half of EV hitting me at 11½mph = that'll buff right out!
Bloggin likes this.
.
To view links or images in signatures your post count must be 0 or greater. You currently have 0 posts.

Join Date: Mar 2007
Location: N NW of Atlantis (Reno)
Posts: 22,734
Blog Entries: 6
Re: 2017 Tokyo Motor Show >> Nissan thing
Quote:
Originally Posted by 2b2 View Post
posting to show how pretty the SHAPE is - at night - until you see it's pumpkin-face...
just came up with a diff way of saying it elsewhere so spamming here:

imho, a vehicle is not meant to be an english muffin ... fill in most-if-not-all the nooks-&-crannies, and basic shape is quite nice ...imho
.
To view links or images in signatures your post count must be 0 or greater. You currently have 0 posts.