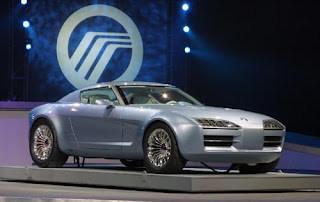 As the breakup scene of any John Hughes flick will tell you, don't waste your time thinking about the girl after you've lost her. That ship has sailed.

Much like we grow attached to significant others over time, though, we also form emotional attachments to certain cars and brands. As anyone whose even been left high and dry by a lady-friend can tell you, the sudden closure of a favorite automotive marquee can leave you with a coupe-shaped hole in your heart.

After the Great Recession and subsequent near-collapse of the auto industry, fans of the Mercury brand watched as Ford brass announced that the nameplate would be no more. While rumors of Mercury's pending death had been swirling for years, the company's recent announcements about a new brand strategy seemed to be the salvation that fans were hungry for.

The last Mercury, a Grand Marquis sedan, was produced in January of this year.

Before the execution, however, Ford management had made allusions to a new strategy for Mercury; to stock the brand with "premium" subcompact and compact models. The first fruit of this plan was to be the 2012 Tracer, a version of the new-for-2012 global Ford Focus.

I don't doubt Ford's reasoning for killing the brand: Mercury had always suffered from a severe identity crisis, sometimes being sportier models, sometimes more luxurious, and for the last 20 years, mostly rebadged Fords. With the skyrocketing public perception (and accompanying ATP's) of the Ford brand, Mercury just didn't make a lot of sense.

Like a teenager with a first taste of love, though, let's take a look back at what might have been. Let's say Ford fleshed out their plan for a new, succinct lineup of premium compacts and subcompacts. What should they have done? Here's how this blogger sees it:

Concept: TRON-inspired futurism blended with cutting-edge technology, offering styling and interior appointments that are more expressive than their Ford brethren.

first, for those who are new or haven't found the Design Section yet:
the Mission: MERCURY! thread
then
other than changing the 'Tracer' name to the Mercury CORTINA
(I had played with calling it the 'Milanetto' while dreaming about it for 5 years ever since the C1 Focus debuted)
I'd be happy with ANYthing ... esp anything easier than my current plans of eventually customizing a Focus (or Lincoln mkE) into a proper C-segment Merc
but also
I'd have definitely made the KuGa the new Mariner
&
have given the small Mercs the full Lincoln feature/package/option treatment...and then some - ie the Mariner would be priced exactly like the (probable) MKG

btw...if you don't know, FoMoCo has been auctioning off old concepts for charity
& the Mercury MC4 concept pictured below went for the 2nd highest-EVER price of Any FoMoCo vehicle (iirc) of recent vintage: over $600,000


Join Date: Nov 2009
Posts: 23
Re: Mercury 2012: What Could Have Been
I struggled with some of the naming, but ultimately settled on a sort-of Buck Rodgers retro futurism feel, which is getting to be popular again.

I decided to keep the utility in the Lincoln brand because it would likely be much more profitable there. Also, having it priced as a Lincoln would free up the development dollars to make it worthy of being a Lincoln.

re: Mariner
It just took me soooo long to reconcile with "The Small Mercs Theorem" that FoMoCo (falsely) proposed that I'm not ready to give up on it now
actually
forgot to say it before
I had strongly wanted the RotW Mazda6 swoopy 5-door as a Milan replacement - it's a good 1/2 foot shorter than our Mz6 iirc - and would have NO internal competition in the US

Quote:
Originally Posted by PREMiERdrum View Post
...What I'd love to sandbox with would be a new Mercury logo... If only I had the time.


Join Date: Sep 2007
Posts: 2,270
Re: Mercury 2012: What Could Have Been
I would have given Mercury the hardtop convertable Focus coupe along with a sportwagon and a mini CUV similar in size to the Kia Soul.
The Milan would have been given a coupe, and The Mariner would be a stretched Escape/kuga. That would be it.
"It is a capital mistake to theorize before one has data. Insensibly one begins to twist facts to suit theories, instead of theories to suit facts."
Sherlock Holmes
Logans Run is offline
Quote Quick Reply
post #7 of 9 (permalink) Old 08-31-2011, 02:07 AM
robert84
Ford Ka


To view links or images in signatures your post count must be 0 or greater. You currently have 0 posts.


To view links or images in signatures your post count must be 0 or greater. You currently have 0 posts.

I'm kind of thinking the Small Mercs Theorem might wind up being the way that Mercury is re-introduced to the few, the un-stoopid

, those with better taste than bankrolls