We have to hand it to Mazda. Lately, the small Japanese automaker has punched well above its weight with the announcement it would bring a gasoline Homogenous Charge Compression Ignition (HCCI) to market in 2019, dubbed Skyactiv-X.

Something else that's intriguing about this patent: it's shown fitted in a rear-wheel-drive application. The only rear-wheel-drive vehicle Mazda currently builds is the MX-5 Miata, which leaves us wondering what the automaker is cooking up. Digging even deeper shows Mazda has also patented a near-identical engine that's described to run on diesel fuel as well.

Mazda previously said its Skyactiv-X engine would use a supercharger, but turbos weren't mentioned in the initial announcement, which only intrigues us further as to what's going on here. Automakers often patent solutions without the intention of actually bringing whatever the system or product is to market, but we hope to see more of whatever this particular engine is in the future.

Join Date: Mar 2007
Location: N NW of Atlantis (Reno)
Posts: 22,734
Blog Entries: 6
Re: what the heck is SkyActive? (HCCI update)
Mazda.com - HIROSHIMA - 2017/08/08
Mazda Motor Corp announced "Sustainable Zoom-Zoom 2030,"
a new long-term vision for technology development that looks ahead to the year 2030. As part of the new technology to achieve this vision, the company disclosed plans to introduce a next-generation engine called SKYACTIV-X in 2019. SKYACTIV-X will be the world's first commercial gasoline engine to use compression ignition...
plus a video in Japanese
Features
 This new proprietary combustion engine combines the advantages of gasoline and diesel engines to achieve outstanding environmental performance, power and acceleration performance.
 Compression ignition and a supercharger fitted to improve fuel economy together deliver unprecedented engine response and increase torque 10-30 percent over the current SKYACTIV-G gasoline engine.*3
 Compression ignition makes possible a super lean burn*4 that improves engine efficiency up to 20-30 percent over the current SKYACTIV-G, and from 35-45 percent over Mazda's 2008 gasoline engine of the same displacement. SKYACTIV-X even equals or exceeds the latest SKYACTIV-D diesel engine in fuel efficiency.
 With high efficiency across a wide range of rpms and engine loads, the engine allows much more latitude in the selection of gear ratios, providing both superior fuel economy and driving performance.
...
.
To view links or images in signatures your post count must be 0 or greater. You currently have 0 posts.

Join Date: Mar 2007
Posts: 10,850
Re: what the heck is SkyActive? (HCCI update)
Mazda powertrain engineering has our attention at Ford. I think we are all only a few years away from large advancements in ICE efficiency. Ford has a few secrets up it's sleeve as well. Traveling nearly 50 miles or so on a gallon of gasoline without hybrid technology is no doubt a popular goal.
ZanatWork and hbmf3 like this.
**********************

Mazda is committed to the rotary, though whether the unique engine design is used to directly power a sports car or serve as a range-extender for an electric car remains to be seen.

Mazda has hinted at both options in recent years but so far has tended to flip-flop between the two.

Now, though, a senior Mazda executive has hinted that both options could be on the table.

Speaking with Automotive News (subscription required/avoided), Mitsuo Hitomi, head of powertrains at Mazda, said a rotary will probably do duty as a range-extender in an electric car. However, he also said a rotary to power a sports car is also being developed.

Mazda will introduce an electric car in 2019. Akira Kyomen, who is heading development of the vehicle, told Automotive News that the electric car will come with a range-extender option. Based on Hitomi's comments, its possible the range-extender Mazda uses will be a rotary.

Mazda has already shown an electric car with a rotary range-extender, the Mazda2 RE Range Extender concept unveiled in 2013. Its rotary was a single-rotor 0.33-liter unit that with a full tank of gasoline could provide 111 miles of range. On batteries alone the concept could travel 124 miles.

As for a rotary-powered sports car, Hitomi said it wasnt the technology holding back the car but the business case. Interestingly, this is in contrast to his comments made just a month ago that Mazda couldnt get its latest rotary engine, referred to as SkyActiv-R, to meet emission regulations.

Heres the #SkyactivX! It appears to have a small water to air inter cooler on the front. Nifty. Boost is fairly low, around 5-7 psi so this isnt trying to be a replacement for Mazdas 2.5L turbo but a new high efficiency engine for mainstream models...

...vs the naturally aspirated 2.5 its comparable in most situations and feels torquier at low RPMs
.
.
To view links or images in signatures your post count must be 0 or greater. You currently have 0 posts. 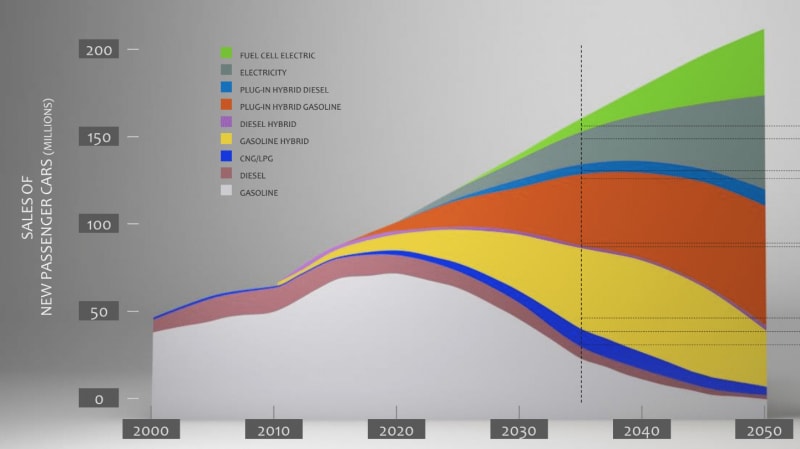 ...Mazda will adopt an approach that becomes more and more electrified and diverse the closer you get to 2035. But internal combustion will play a deep and central role up to that point, and probably beyond. Before we get to what those different powertrains, diesel and electrified, will look like down the road, let's stop and think about Mazda's philosophy.

It couldn't be more different from the approach of most manufacturers that are currently producing BEVs and hybrids, which are heavily incentivized by both the automakers and the government, both state and local, depending on the locality. Even with all that cash on top of the hood, the market penetration of electrified vehicles is low. Mazda's too small to lose money paying people to drive EVs and hybrids.

Its risky solution (which is plucky, but has had mixed results) is to simply improve the internal combustion engine. It's achieved the best fleet average fuel economy in the U.S. already, using a range of direct-injection gas engines that are mostly naturally aspirated. A few tiny nods to electrification have been introduced, like i-eLoop regenerative braking and the Demio EV (a Japanese-market, last-generation Mazda2 with a 20kWh battery that was tested with a tiny rotary engine range extender). But the focus is on combustion, not electricity... 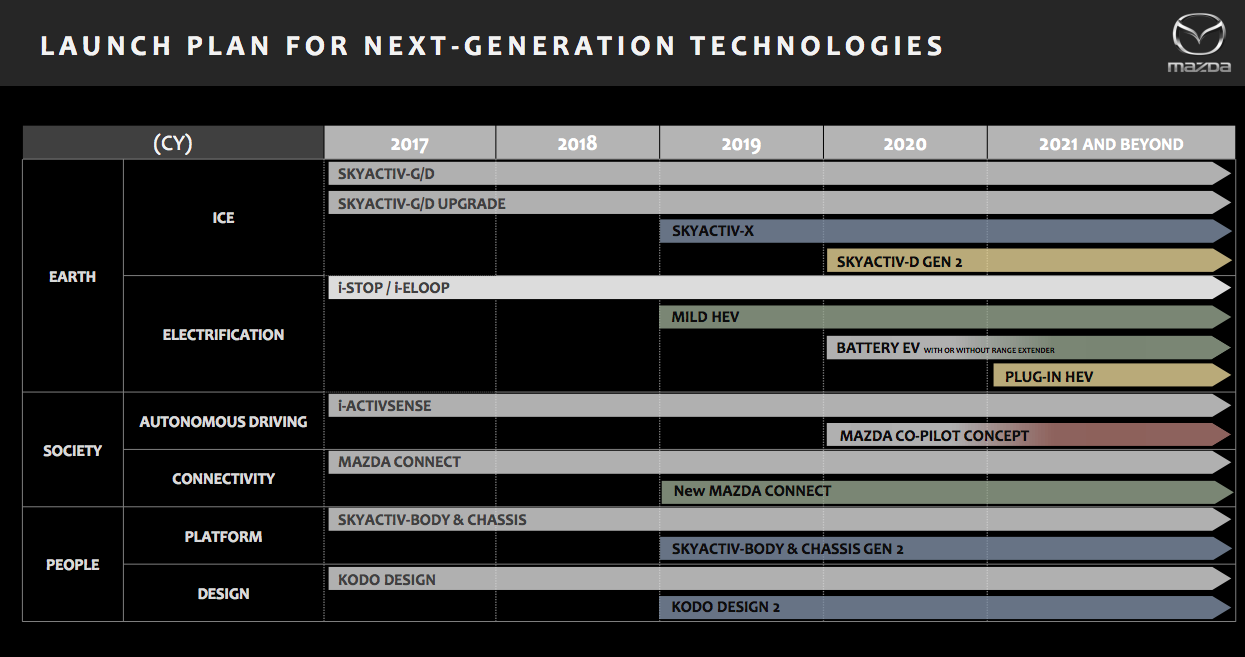 ...Mazda, one of a dwindling handful of automakers not in possession of an electric (or even hybrid) vehicle, plans to change that status next year with the introduction of a small battery-powered car. Coming along for the ride  at least in one variant  is a rotary gas engine designed to go unnoticed by the driver.

...Sharing a new Small Car Platform with the next-generation Mazda 2, 3, and CX-3, the unnamed EV will debut with dimensions similar to the 3, possible as a crossover-like model, ten Brink said.

For drivers worried about running dry while miles from a plug, Mazda will offer the option of a a range extender in the form of a wankel engine, the executive added. As theres only so much battery space beneath a vehicle designed for all types of propulsion, range and battery size should be mid-pack. Having a rotary on board  one designed solely as a generator  not only eliminates fear of being stranded without a power source in the middle of nowhere, it also broadens the models appeal.

Not that sales are a huge consideration. Mazdas treating the upcoming global model as something of an experiment. Whether we sell 5,000 or 10,000 of them, we are going to learn a lot from them, Martijn ten Brink said.

Mounted flat, the rotary generator will reportedly be no larger than a shoebox, with related hardware expanding the powerplants footprint to that of two shoeboxes. The smooth-running engine, positioned low in the vehicle, should go unnoticed when in operation. (Hardly the spiritual driving experience of past rotaries, but at least it keeps the engine type alive.)

If all this talk of electric vehicles and crossovers has you feeling listless, fear not. Theres still a fire burning at Mazda HQ for a true rotary-powered sports car. Unfortunately, no shortage of uncertainty surrounds this future mystery model, which clearly isnt at the top of the automakers to-do list.

Why Mazda Is Fighting For the Future of Internal Combustion
At the 2018 New York International Auto Show, R&T spoke with Mazda engineers about Skyactiv-X and the fate of internal combustion
R & T - Bob Sorokanich - APR 2, 2018 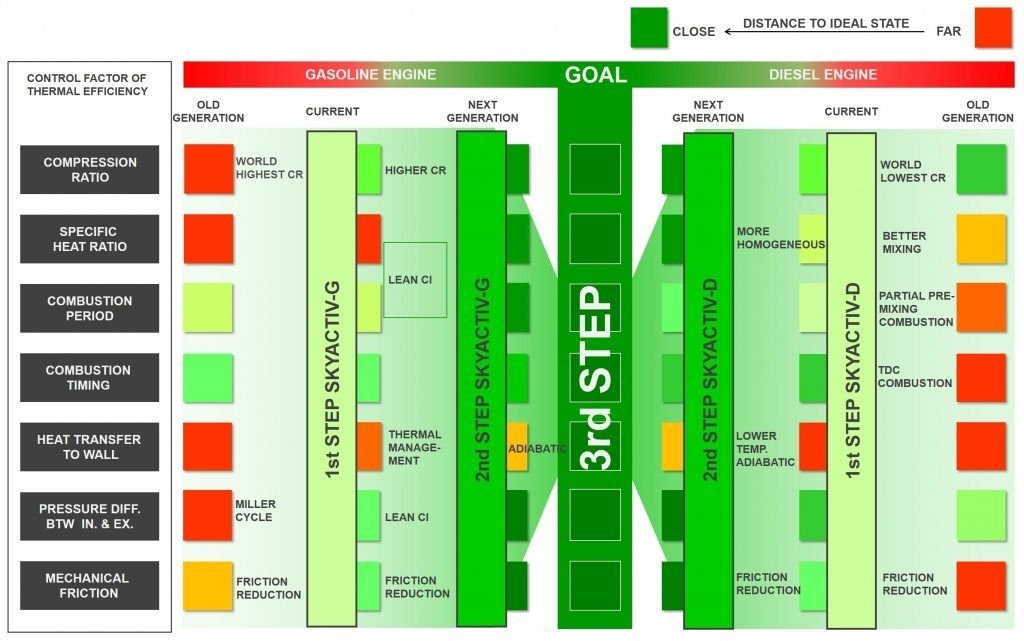 A chart of the ideal characteristics of gasoline and diesel engines that guided development of Skyactiv-X: Mazda

Compression ignition is nearly instantaneousall the fuel in the combustion chamber flashes and burns simultaneously. Uncontrolled, it's a violent processhence why pinging and knocking in a traditional engine can damage valves and pistons, particularly if it happens at the wrong moment. But Mazda engineers figured out a way to precisely time this compression ignition event using the engine's conventional spark plug. In compression-ignition mode, the engine runs a super-lean air-fuel mixtureup to 30:1, compared to a conventional engine's 14:1. High-compression pistons squeeze the intake mix nearly to the detonation point; when the spark plug fires, the ensuing pressure increase caused by the burning of the fuel nearest the spark plug triggers compression-ignition throughout the combustion chamber. It's like detonation, but precisely timed and controlled, harnessing the instantaneous and complete combustion of detonation to drive the piston down on its power stroke... 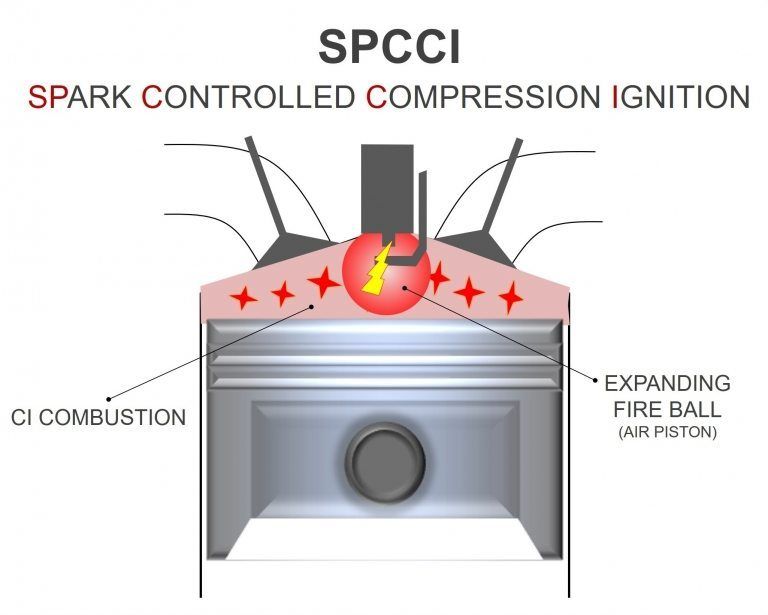 Re: what the heck is SkyActive? (HCCI update)
Quote:
Originally Posted by wingsnut View Post
Mazda powertrain engineering has our attention at Ford. I think we are all only a few years away from large advancements in ICE efficiency. Ford has a few secrets up it's sleeve as well. Traveling nearly 50 miles or so on a gallon of gasoline without hybrid technology is no doubt a popular goal.
As much as I understood the need for Ford and Mazda to part ways, I still kinda pull for 'em to keep making fun vehicles, and to be a little out-of-the-box. They're similar to how Honda was when they were much more interesting than now.
If GM can justify Buick, and if Honda can justify Acura, we can damned well have Mercury back.
ZanatWork is online now
Quote Quick Reply
post #30 of 44 (permalink) Old 04-02-2018, 08:31 PM
glyphics
Focus RS WRC


Join Date: Dec 2012
Posts: 866
Re: what the heck is SkyActive? (HCCI update)
Quote:
Originally Posted by ZanatWork View Post
As much as I understood the need for Ford and Mazda to part ways, I still kinda pull for 'em to keep making fun vehicles, and to be a little out-of-the-box. They're similar to how Honda was when they were much more interesting than now.
Without Ford "oversight," Mazda is much more free to be the innovative and risk-taking automaker that it is. I too root for them despite the fact that all of their cars (until ...) are FWD-based.
glyphics is offline
Quote Quick Reply