Join Date: Mar 2007
Location: N NW of Atlantis (Reno)
Posts: 22,734
Blog Entries: 6
Re: Fusion/Fiesta/Taurus Officially Cancelled
Quote:
Originally Posted by glyphics View Post
...I think most everyone here really roots for Ford and wants the best for it as a favorite U.S. marque.

That said (disclaimer; what's next is my opinion only.), I think most of us agree that Ford bungled this announcement in a way that can easily become a case study at any business school (let's start at MIT). This announcement was to placate the analysts on Wall Street not people who love cars (that's us). Sure Ford has to look to the future but there's plenty of time between now and then. Meanwhile, Ford has to produce marketable vehicles until that future arrives.

I don't think that Ford was losing tons of money on its underperforming sedans. They just weren't making enough to satisfy Wall Street and the Ford family shareholders, some of whom don't have to work for a living. Let's face it, the Tesla phenomenon - all of that investment money going to an unprofitable startup - has Ford shareholders worried. Rightly so since for years they dropped the R&D ball trying to please the stock market. I'll get a lot of flack for saying that but just why were their sedans underperforming in the marketplace? Don't blame the trends toward SUV/CUVs; other companies are happy to produce new and improved sedans.

Automakers have to be in every market segment to be viable (except BMW it seems; they don't make pickups). Ford is at risk of becoming a niche player in the automotive ecosystem and a potential target for takeover. Don't laugh; Mercedes Benz is girding itself against a Chinese takeover right now.

Mercedes-Benz sold more cars in China than any other market last year, some 600,000 cars and SUVs, he said. That's twice what they sold in the U.S...

Quote:
Originally Posted by Jpd80 @ B0N
Fuel economy is only a concern to most buyers when it hurts their hip pocket. Most expect manufacturers to evolve their vehicles and include good fuel economy as as standard feature and i think that this is the one big draw back to electrification, especially when gas prices and interest rates have been so low for so long.

Reality will bite with rising gas prices and interest rates but as always, human nature will dictate that most truck and Utility buyers will expect manufacturers to change and offer them more efficient versions of their current vehicles, rather than force them to seek refuge in compact and mid sized cars.

The reason not much has been said about Fusion is that Ford is probably watching to see what actually happens this year & the Next and whether something needs to be added back into the vehicle mix to cover remaining car needs.- it's a vehicle size worth watching.

& that last pgraph makes me shake my head & wonder...
...just hard to believe that Ford can be that..."all-that" [like business-Gorilla-warfare?] or [acrobatic?] or
[willing to work That hard**?] sorta felt they've always depended more on inspiration than perspiration

** NOT pertaining to those BELOW the executive suites!!
biker16 and jpd80 like this.
.
To view links or images in signatures your post count must be 0 or greater. You currently have 0 posts.

Join Date: Apr 2013
Posts: 7,893
Re: Fusion/Fiesta/Taurus Officially Cancelled
This is what Ford had better be paying attention to with their plan to 'upgrade' consumers into more expensive, less fuel efficient crossovers and SUVs.

"What we see now is more of the sport utility vehicle [and] crossover vehicles are built on car platforms, and they get much better vehicle economy, in fact there isn't much penalty between a midsize sedan and a compact sport utility," Michelle Krebs, senior analyst with Autotrader, told Automotive News. "Despite the rise in gas prices, people still want the versatility and practicality of those utility vehicles."

The study also found that an acceptable price for a gallon of gasoline is $2.50, according to respondents, and the ceiling for when fuel cost would become a big factor when purchasing a new vehicle, is the $4-per-gallon mark.

The respondents who did indicate that higher fuel prices have influenced the vehicle they are considering are "now likely looking at smaller, less expensive, more efficient transportation."

Then there is this...

Average gas price in California predicted to hit $4 a gallon
By Amy Graff, SFGATE Updated 8:02 am, Wednesday, May 2, 2018

"The price of gas is now above $3.50 a gallon in all major cities across California. And in San Francisco where the average is the highest in the state at $3.71, you might have already paid more than $4 at a pricier station."

"Average prices are up by around 50 cents compared to Memorial Day last year, costing motorists an estimated $1 billion in additional travel expense from Thursday through Monday."

Join Date: Mar 2007
Location: N NW of Atlantis (Reno)
Posts: 22,734
Blog Entries: 6
and 'then' there was(/will be) ONE
enlarging the beginning of the [f]article because of how MISleading it is to sound like it's already happened

Mustang Means Freedom: Why Ford is Saving an American Icon
Ford is phasing out its passenger cars, except one: the Mustang. The car may be only modestly profitable for Ford, but it has deep emotional power.
NYTimes - James B Stewart - MAY 24, 2018

When Ford Motor all but eliminated passenger cars from its North American lineup earlier this month to concentrate on trucks and S.U.V.s, it turned the page on a long and storied history of now-defunct but once red-hot nameplates: the Model T, the Model A, the Galaxie, the Fairlane, the Thunderbird and the Falcon, to name several.

There was one conspicuous survivor: the Mustang.

Get rid of the Mustang? asked James D. Farley Jr., Fords president of global markets, when I asked him this week how the Mustang had survived. The Mustang is like Rocky: It survived the 1970s fuel crisis, the glam 1980s, the move to S.U.V.s. Its made it through every round of cuts.

For me, the Mustangs reprieve came as welcome news: I took my drivers test in my mothers 1967 turquoise Mustang notchback. On the rare occasions I was allowed to drive it, it conferred instant status and triggered unabashed envy among my high school classmates.

Wall Street probably would have been just as happy to see the Mustang go the way of the Fusion, Taurus and Fiesta, current models that Ford said it would phase out and which Mr. Farley dismissed as commodity silhouettes. (Ford says it will continue to make passenger vehicles, but they just wont be in the shape of todays sedan. The Focus, for example, will survive, but as a crossover S.U.V.)

Thats because in its last earnings report, Ford revealed for the first time that a relatively small number of products, including the hugely popular F-150 pickup truck series, accounted for 150[?] percent of its earnings before interest and taxes, with profit margins in the midteens. Another group was barely profitable. By contrast, Ford said its low performing products lost money, with negative margins of more than 10 percent.

Mr. Jonas applauded Fords decision to drop most of its passenger cars, assuming the company actually follows through on it. If a disproportionate effort is going into products that dont make money and consumers dont want, then what are they doing? he asked.

Ford doesnt break out financial results by model, but Mr. Jonas believes the Mustang is modestly profitable. The base hardtop starts at $25,845, but popular options can quickly drive up the cost. The convertible starts at $31,345. The most popular model, the Mustang GT fastback, can easily top $40,000, and the 526-horsepower Shelby GT350 starts at more than $57,000. A racing version of the Mustang Cobra can hit six figures.

I cant think of another car where some models sell for four times the base price, Mr. Farley said. We sell a lot of Mustangs that are $70,000.

But the Mustangs survival isnt really about numbers. Five years from now, whether Ford decided to keep the Mustang or not isnt going to be a material factor, Mr. Jonas said. Its more of an emotional thing. Theyre trying to preserve the sexuality of motoring the way it used to be known.

From the day it was introduced 54 years ago, Mustang was positioned as a stylish, affordable and practical alternative to expensive European sports cars. In various tests, the Mustang GT still compares favorably to the Porsche 911, which starts at over $90,000.

So iconic is the Mustang that it has been commemorated with a Postal Service stamp  twice. The latest one, in 2013, depicts a blue 1967 model bisected by two white stripes.

Mustangs have appeared in countless movies and television shows, becoming an indelible image of American culture. In Goldfinger, James Bond ran a white 1965 Mustang convertible with red interior off the road.

Steve McQueen drove a dark green 1968 fastback in Bullitt, in which Mustang emerged as a classic muscle car. This year Ford is selling a 475-horsepower Bullitt anniversary edition, complete with, in a nod to the original, a cue ball on the stick shift. The Bullitt limited edition sells for $47,495. (The first one off the assembly line sold at a charity auction earlier this year for $300,000.)

A souped-up 1967 Mustang fastback stars in The Fast and the Furious: Tokyo Drift. But Mustangs arent all about high testosterone. A 1966 convertible is featured in The Princess Diaries, and Ford said 27 percent of Mustang buyers are women.

William Clay Ford Jr., Fords executive chairman and the great-grandson of founder Henry Ford, is a Mustang fanatic, with 20 versions in his personal collection. Mr. Ford showed up at the companys annual Mustang birthday party last month in a navy blue 1968 Mustang Shelby 500 convertible with a white top.

I put it in the same category as the Corvette, said Eric Minoff, an automotive specialist at Bonhams auction house in New York. The Mustang is a cultural icon, he added. Even people who dont know anything about cars recognize a Mustang."...


...Mr. Farley described the Mustang as a mind-set vehicle. When we ask people around the world what they think of Ford, they say Mustang, he said. Mustang means freedom. It means taking a road trip in a convertible down the West Coast. Thats what people all over the world imagine America to be. Why would we ever give that up?

.
jpd80, Bloggin and Nihar Mazumdar like this.
.
To view links or images in signatures your post count must be 0 or greater. You currently have 0 posts.

Join Date: May 2017
Location: San Antonio, Texas
Posts: 743
Re: Fusion/Fiesta/Taurus Officially Cancelled
I wonder if they can use the Mustang to make an A7-like car for themselves and Lincoln. Maybe inject some utility in it. 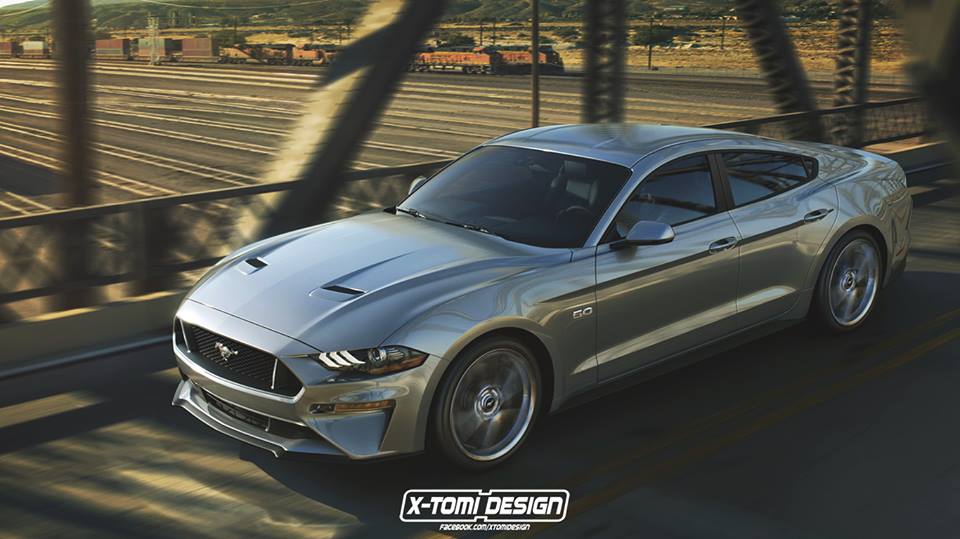 (instead of using the Fusion platform)

I made this silhouette of what I think is the perfect sedan replacement. I was thinking of combining it with a Focus Active-like ride height, which I wouldn't mind, but I was not sure how to do that.

It's an Audi A7 with the rear slope of a Ford Taurus. (This makes the headroom a lot better).