Ford may have put the Focus on the podium for the 2012 North American Car of the Year award but it's showing no signs of resting on its laurels. The 2013 Ford Focus ST, which will be available this summer, will come equipped with a 2.0-liter four-cylinder engine pumping out 252 horsepower and 270 pound-feet of torque through a six-speed manual transmission and 18-inch wheels. It will have three-mode stability control and available Recaro seats.

And it looks awesome. But looks alone means little to those seeking a real driver's car. Now it's time to find out what it's like to drive. Prepare yourself for a surprise.

A Wolf in Wolf's Clothing
Often an alleged performance car will have looks that write a check the car beneath can't cash. After all, it's far easier and cheaper to make a car look fast than it is to make it go fast. But Ford, no doubt stung a little by suggestions its new Focus is effective but a little dull to drive, has ensured the ST delivers in full on the promise made by its steroidal appearance.

Indeed the surprise is just how far Ford has gone with the ST. The specifications sound promising all the way from its turbocharged engine to a chassis altered in every detail. There's a new variable-ratio steering system, new springs, dampers, stabilizer bars, lighter yet stronger forged knuckles and a lower ride height. But it is only when you climb aboard and feel the way all these elements come together that you get a true sense of the car's character. In short, it's an animal.

Over the Limit
At speed the 2013 Ford Focus reveals a character far closer to the Focus RS than any Ford to wear the ST badges. Sure it's nowhere near as quick as the crazy RS (and has nowhere near the torque steer), but its no-prisoners approach to the racetrack is the same.

The engine is no landmark, but rather is a highly effective conduit to where the real fun lies. It sounds better than a turbo-4 has a right to thanks to Ford's "sound symposer" in its exhaust, which separates the sounds you want to hear from those you don't, and it delivers the goods in one solid shove from as little as 2,000 rpm. Ford is yet to release performance figures, but if the ST doesn't post a 0-60-mph time very near 6 seconds flat, it will only be because it lacks the traction, not the power. 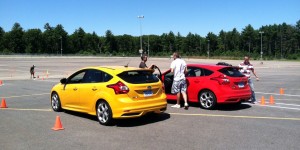 Some weeks ago, we received word from Ford about “THE THRILL OF A LIFETIME” being offered in the parking lot of a local stadium on weekends during the summer. With a mug of hot coffee and the anticipation of the aroma of burnt clutches, we headed to Boston to experience it for ourselves.

In an effort to promote the 2013 Focus ST — the hot hatchback we’ve been talking about for months — Ford is offering enthusiasts and potential buyers first crack behind the wheel around the country. Dubbed Focus ST Performance Academy, it goes beyond a typical ride-and-drive event by offering consumers time around a makeshift autocross track.

Until we get extended seat time, here are six things you’ll want to know about the Focus ST:
• The engine is a serious powerhouse...
• The dynamics are stellar, too...
• Its driving position is not for everyone...
• You will want the Recaro seats in front...
• …though it’s a little tight in back...
• It’s a killer value...

...I drove to Boston to attend a consumer event, at which Focus ST demo cars were provided for evaluation. Want to test the ST’s mettle for yourself? There are two Performance Academy sessions scheduled in San Francisco and Los Angeles in early August. You can sign up here. It’s a blast.