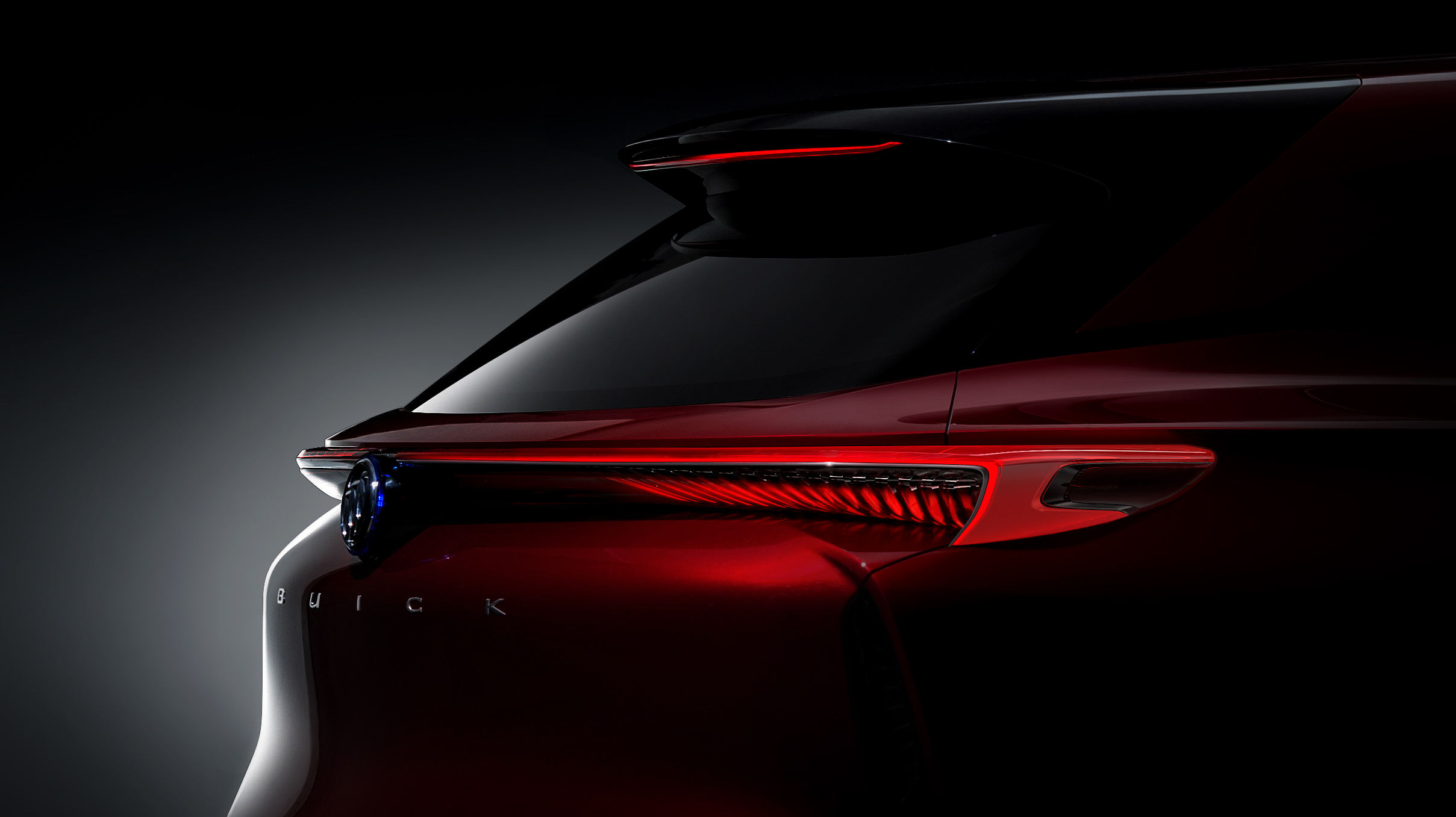 Buick today announced that the Enspire, its new all-electric concept SUV, will make its global debut at Buick Brand Night on April 17 in Wuzhen, Zhejiang. It will also be on display to the public at Auto China 2018 in Beijing, which begins later this month.

The Enspire leverages GM’s global resources and is an exploration of design and new technologies. It is the brand’s latest example of innovation and application of future electric smart mobility.


Buick has just revealed its sleek Enspire all-electric SUV.
The automaker says it goes 370 miles per charge and notes it can sprint from 0 to 60 mph in 4 seconds. Not quite in Tesla Model X territory, but certainly on the quick side for an SUV.

With a 370 mile battery pack that can go under any other midsize sedan, coupe or sports car offering even longer range.

Now the question is what does GM have in store for the next gen Camaro.
L

Bloggin said:
So is GM turning Buick into their luxury Full Electric brand?

With a 370 mile battery pack that can go under any other midsize sedan, coupe or sports car offering even longer range.

Now the question is what does GM have in store for the next gen Camaro.
Click to expand...

They probably should, since no buick has a decent power level.
A

Joined Sep 28, 2016
·
1,812 Posts
Hmmm...well at least Buick doesn't look like "Buick" anymore...I use "Buick" to slander other carmakers design once they started getting to pudgy and chromey...which Lincoln has been flirting with too much lately.

A preview of the electric X3 which is due for release in 2020 is to be displayed for the first time at AutoChina. And Volvo will be exhibiting the Ambience concept, a new take on its existing S90 Excellence.

Information on the following models can be found by searching PLDB, just-auto's global vehicle database. Simply click on the link at the end of this list.

Acura CDX Hybrid: petrol-electric version of the two-year old C segment/Compact SUV will be manufactured by GHAC at ZengCheng #2 in Guangzhou

Aiways RG concept: reportedly the first use of the ambitious start-up's GES platform, initials stand for Roland Gumpert which developed this electric supercar

Audi Q5 L: the first long-wheelbase SUV from the brand, FAW Volkswagen has just started building it in Changchun, will be in local dealerships from June

Beijing Auto BJ40L: high end version of the existing Wrangler lookalike gains a bespoke interior and colour-coded wheelarch extensions to set it apart from the BJ40

BMW Concept iX3: no details as yet other than the name and video teaser but it is known that an electric version of the X3 is being developed and due for release in 2020

BMW Wireless Charging: now available as an option for the 530e iPerformance

Buick Velite 6: PHEV and EV variants will be manufactured by SAIC GM, cars will be based on the Velite concept from 2016

Changan Eado DT: new name and a facelift for the Yuexiang V7, a small sedan that was launched at the Chengdu motor show in August 2014

Chery Arrizo 6: additional model to be positioned above the Arrizo 5 and should likely also replace the slow-selling Arrizo 7 sedan

Citroen C4 Aircross: C3 Aircross-based crossover, to be manufactured by DPCA and on sale in China during the second half of 2018, likely to be built in Brazil and France too

Denza 500: the 400 is facelifted and gains a new name to reflect the claim that a new battery gives the car a range of up to 500km

Dongfeng-Fengxing ix5: prototype of a D segment SUV with choice of 1.8 or 1.5-litre turbo engines, infotainment system is based on Baidu Apollo, due on sale in Q4

FAW Junpai D80: 4,500mm long SUV is positioned above the D60, powered by a 1.2-litre turbo four-cylinder engine, has J U M P A L on tailgate instead of Chinese name of Junpai

Ford Focus sedan and five-door hatchback: sedan was revealed to the media at an event in Chongqing on 10 April, this is the public world premiere for both bodies

Geely Emgrand MPV: model name not yet known, production version of the VF11 project, 4.7m long, three powertrains including a hybrid with an EV to follow later

Haval H7 facelift: a minor restyle for this SUV which premiered at the 2016 Beijing show

Honda EV: to be built and distributed by GAC Honda by the end of 2018, there will also be an equivalent model for Dongfeng Honda

Honda 'sedan': no further details as yet but Dongfeng Honda will have "the world premiere of the concept model of an all-new sedan model"

Hybrid Kinetic K350 concept: preview of a future SUV which also uses motors and a micro-turbine and is said to have a maximum range of 1,000km

Infiniti QX50: Dongfeng Nissan's Dalian plant has begun building it, first vehicle to be made there using Daimler's MFA 2 architecture, first of five Infinitis to be built in China over a
five-year roll-out period

Jeep Grand Commander: a rival for the Toyota Highlander, Volkswagen Teramont and Ford Edge, powered by a 2.0-litre petrol turbo engine, will be built by the GAC-Fiat joint venture
and is a special model for China

JMEV E500: first model for a new brand from JMC (Jiangling Motor Corporation), SUV based on the Yusheng S330 and Yusheng S330 EV

Lexus ES: even though TMC does not manufacture any Lexus vehicles in China, the current ES is especially successful as an import, thus this event for the new model's world debut

Lynk & Co 02: second model from the Geely division, project code is CH11, is a 4,448mm long five-door hatchback, revealed to the media on 26 Mar

Mazda CX-8: left-hand drive world premiere for this large SUV which has been available only in Japan (since December), no word as yet on where China's model will be built

Mercedes-Benz A-Class Saloon: sedan will be manufactured by the Beijing Benz joint venture mainly for the Chinese market

Vision Mercedes-Maybach Ultimate Luxury concept: large sedan but with proportions of an SUV, interior has much copper-effect detailing and a tea service for the rear passengers

Nissan Sylphy EV: looks almost identical to the existing sedan but there is a fresh bonnet pressing which includes a cut-out for the recharging flap, Dongfeng and Venucia brands will
also have cars based on this

Nio Eve concept update: prototype which premiered at SXSW in 2017 is to have as yet unspecified changes

Ora iQ5: debut for Great Wall's brand which will sell only electric vehicles, prototypes of a 4.5m long crossover have been seen with 'ORA' in large letters on the tailgate, brand is
'Oula' in Chinese

Qiantu K20 concept: small electric coupe follows the debut of the K50 at AutoChina 2016 but still no plans announced for any production intentions

S1Tech Dev1: 3.7m long electric hatchback is the first model for a new FAW brand, has face recognition technology, will be manufactured at one of FAW's Changchun plants

Toyota Corolla plug-in hybrid: to be manufactured by FAW Toyota

Toyota Izoa: FAW Toyota gains its own slightly altered version of the C-HR which is to be sold in China by the GAC Toyota joint venture

Traum Meet3: second model for Zotye Auto's additional brand is a C segment SUV based on the Zotye SR7, has a built-in Pioneer karaoke system

Volkswagen Tayron: additional SUV which will be manufactured by FAW Volkswagen, expected to use MQB A/B architecture

Volkswagen 'Powerful Family SUV': not its production name, will be manufactured by SAIC Volkswagen, other details to follow

Volkswagen Touareg: in common with the Audi Q7, Porsche Cayenne, Bentley Bentayga and Lamborghini Urus, has MLB Evo as its platform

Volvo S90 Ambience Concept: potential version of the three-seat S90 Excellence which offers a scent diffuser, speakers in the passenger's head restraint and relaxing images
projected onto the glass ceiling

Wey-X concept: crossover with Level 5 autonomy and a holographic miniature female assistant, outside there is a large longitudinal fin at the centre of the tailgate which supports the
third brake light

Yudo Pi 7 concept: preview of the EV specialist brand's third model which is expected to join the recently released X-Pi and Pi 3 in 2019
B

^ :thumb:s for posting about a non-dying market :sigh:

Hyundai Lafesta Is A Korean Sedan With An Italian Name For China...
...And it's actually pretty sporty looking
Motor1 - Jeff Perez, Editor - APR 25, 2018 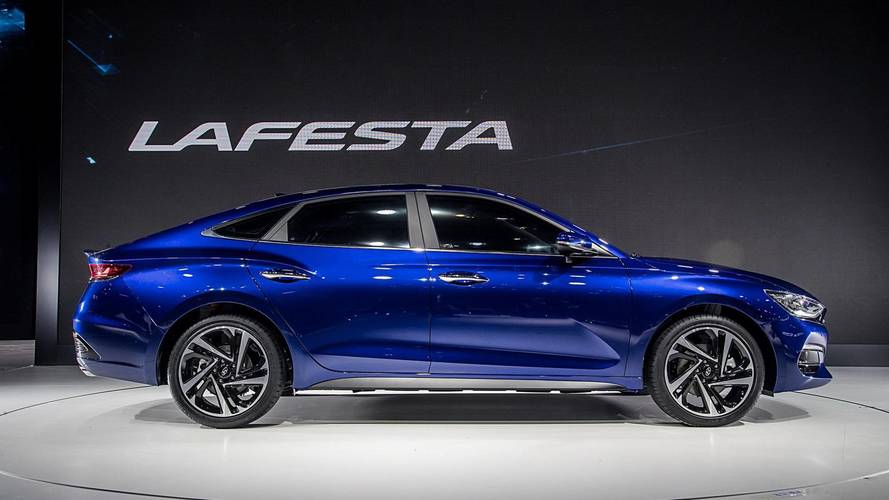 Judging by its name alone, you might guess that the "Lafesta" is some obscure, one-off supercar from an Italian workshop somewhere. But no, it’s actually a Hyundai; the small Lafesta sedan – which translates to "festival" in Italian – showed up surprisingly at the Beijing International Motor Show as a vehicle focused on the Chinese market exclusively.

Though we don't have any official images to work with just yet, Hyundai says that same sporty styling translates to the cabin, too. A cockpit-style design comes paired with high-quality materials. The Lafesta is said to also feature some of the most advanced, safest driving assistance systems available on any Hyundai product to date.

"China is evolving quickly and so are Chinese people’s attitudes. They are more self-confident, positive and creative. The Lafesta will help us reflect this shifting trend," said Simon Loasby, Director and Head of Hyundai China Design. "It’s a clear demonstration of how our newly announced design vision, ‘Sensuous Sportiness’ comes to life in Hyundai vehicles."

Pairing appropriately with its aggressive design, the Lafesta comes powered by a 1.6-liter turbocharged GDI engine mated to a seven-speed dual-clutch transmission. Hyundai doesn’t say how much the powertrain will produce, but given its "sporty" designation, here’s hoping it’s somewhere in the neighborhood of 200 horsepower (149 kilowatts), at minimum.

The Lafesta will go on sale in China in the fourth quarter of this year, but isn’t expected to make it to any other markets. More details like price and performance will be given following an official launch outside of Auto China later in the year.

Joined Sep 28, 2016
·
1,812 Posts
It's going to be something of a miracle to see a Ford electric vehicle, it's a little like a mythical unicorn. Something we talk about but never see.
B


Mercedes-Benz has a new EQ S (PHEV version shown) coming by 2020 to challenge the next gen Model S.