America’s top-selling car is in danger of losing its title.

Toyota’s Camry has been No. 1 for more than a decade, but the company is stretching to keep it there with price cuts, rebates and lease deals.

Camry sales fell 2 percent from January through June. Meanwhile its main rivals in the midsize car market — the Honda Accord, Nissan Altima and Ford Fusion — posted big gains. The hot-selling Accord trailed Camry in sales by 21,000 at the end of June. Last year at this time the gap was 59,000.

Toyota has raised discounts and cut the Camry’s price in an effort to keep it on top. In early July, the Camry’s average sales price was the lowest of the nine top-selling midsize cars, according to data from J.D. Power and Associates. Discounts on the Camry were among the highest in the segment, according to the data.

Camry has lost style points, literally. While the car’s ultra-conservative design appeals to many loyal Toyota buyers who favor basic transportation, others are defecting to the sportier Accord, Fusion and Altima, industry analysts say. Those cars also have more features and better performance, they say.

“Although the Camry is not that old, it certainly seems older than the rest,” said Jessica Caldwell, senior analyst for the Edmunds.com automotive website. She says Toyota needs to hold onto Camry’s market share because it’s the mainstay for the brand in the U.S., Toyota’s largest market.

To combat the falling sales and market share, Toyota has lowered the Camry’s price. The Camry on average sold for just over $20,900 in early July, about $1,400 below the price from a year ago, according to the J.D. Power data. Discounts, such as low-interest loans and sweet lease deals, totaled nearly $3,100 per Camry, up almost $1,900 from July of last year and among the highest in the market, according to the data.

The Accord is rolling off dealer lots even though it sells for roughly $2,600 more than the Camry for an average of $23,500. That includes discounts of only $1,300 per car, the lowest in the market......READ MORE

Looking at daily inventory, the Camry and Altima are maintaining 46k units, with Accord at 43k. Fusion was finally able to reach 21k units for July. Someone may thing with the competition having over twice as much daily inventory, that they should have twice the sales volume. But that's not the case. Fusion production is strong at 300k units before Flat Rock starts production. The difference is how quickly the Fusion is selling compared with the competition. The competition is 28+ days on lots, while Fusion is 18+ and the Fusion Hybrid is even less.

However, based on Ford's production plan for the Fusion at Flat Rock, with only scheduled production for the lowest price Fusion S at $21,900, and higher volume Fusion SE 1.5L trim level at $23,855. Compared with the Camry L at $22, 235 and SE at $23,400, it looks like Ford is prepared to target the low end of the market, with much higher volume. Right were Camry lives.

Currently Camry has a $269/mo Zero Down lease for the LE. Which based on features is the Fusion S which Ford has no lease plan offered due to low inventory of this model until Flat Rock starts production.

Then there is the most recent Hybrid Efficiency Update, that reduces the accessory drain on the battery, and the new 85mph hybrid mode, offering better mpg during test drives, will create an easier sell for the dealer. Which is being installed on all 2013 and 2014 Ford hybrids.

But for 2014 there is the Fusion Hybrid S at $26,391 at just $251 more than the Camry Hybrid LE at $26,140. With Camry Hybrid just 3,551 ahead of Fusion Hybrid, this is the one key model where Ford has a clear shot at outselling the Camry, and I am most certain that this is where Ford will push hard to ensure that Fusion Hybrid outsells Camry hybrid for 2014. 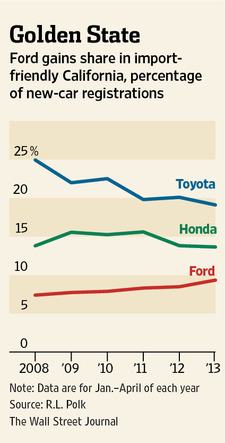 Joined Jul 21, 2010
·
183 Posts
I'll be the first to admit that I'am not a death to Toyota antagonist, however I do believe that being the #1 seller (as in the case of the Camry since 97') doesn't always equate to being the best. FWIW the last gen Altima, Accord, and Fusion had been nipping at the heels of the Camry for years and it was then that I feel Toyota should have taken a more proactive approach in creating more style and substance.....two areas where the Camry is seriously lacking.
L

Joined Sep 7, 2007
·
2,270 Posts
The dollar/yen exchange rates are becoming more favorable to japanese companies now. The price cuts/discounts may not be costing them as much as it appears. As the japanese discount, and American companies produce competative alternatives, it will be the koreans and VW who will feel the pressure the most.
B

Logans Run said:
The dollar/yen exchange rates are becoming more favorable to japanese companies now. The price cuts/discounts may not be costing them as much as it appears. As the japanese discount, and American companies produce competative alternatives, it will be the koreans and VW who will feel the pressure the most.
Click to expand...

That's true. But Toyota used up some of their yen advantage with the 'refresh' that was done to upgrade the interior without a price increase. Then more to add the Zero % Financing, then more with Zero % down lease, and more for $2k off retail pricing. But sales continue to drop.

Joined Mar 28, 2007
·
5,028 Posts
Looks like Ford is preparing a fierce attack to Camry when Flat Rock plant start Fusion production! And that is good... is time to off the top Camry.

And i will not throw a tear for Toyota