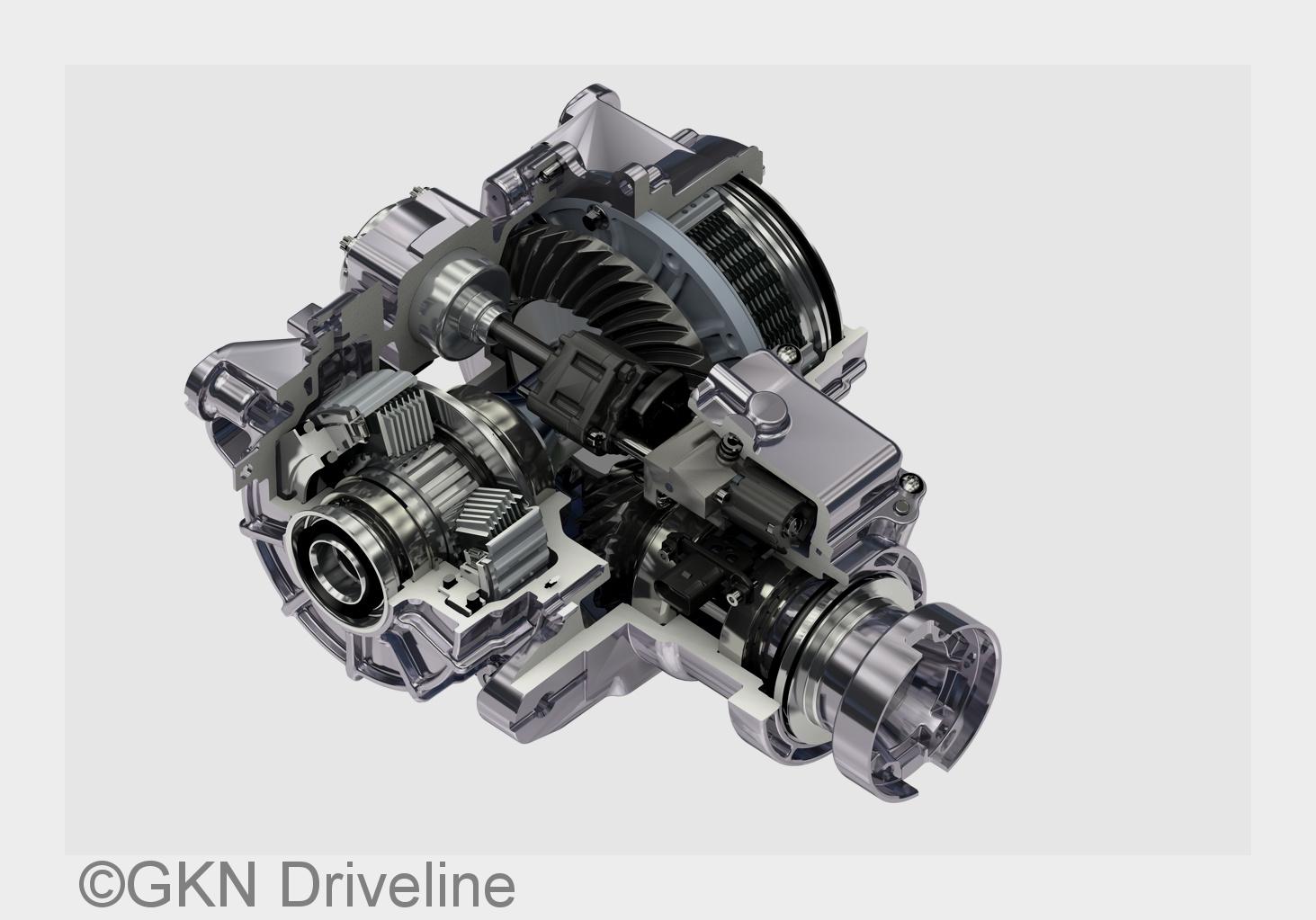 The specially developed for the Ford Focus RS Twin Ster technology will be presented at the booth of GKN (H 5.1, B32) at the IAA Frankfurt.

Peter Moelgg, President Engineering of GKN Automotive, commented: "The all-wheel technology and the Torque Vectoring expertise of GKN help vehicle manufacturers in the process of opening up new areas with their models. Especially for vehicles with high performance is the intelligent all-wheel drive to the drive technology par excellence; it is the most effective way the power, precision to bring, efficiently and intelligently to the road. "

GKN was awarded the contract for the Ford Focus RS program only 18 months before the launch. During this time the engineers at GKN the rear axle torque vectoring (RDM) and the Power Transfer Unit (PTU) and the CVJ side shafts have developed and integrated into the front-wheel drive-based platform. To the system in the existing space to "packagen", a deep feature integration of the system components required. The GKN software and calibration teams have jointly developed with Ford vehicle dynamics engineers new control algorithms for the Torque Vectoring system to provide such a drive train with four different driving modes can.

Dr. Ray Kuczera, GKN Driveline Vice President Global Product Technology, said: "GKN is the only manufacturer with the know-how and the ability to deliver these different hardware and provide the vehicle by integrating software and performance calibrations. To provide torque vectoring systems of this quality, it requires engineers to understand the dynamics and have the ability to work together with car manufacturers on vehicle level. The result of this partnership with Ford shows how powertrain innovations affect the driving dynamics and can heave the handling performance to new levels. "

How the system works by GKN
When Ford Focus RS a wheel system GKN with PTU and a rear axle with twin Ster-coupling system is used. GKN's Twin Ster technology can distribute wheel-selective torque to the wheels. This allows dynamic torque vectoring capabilities of the vehicle over the entire speed range.

The latest version of the Twin Ster-system in the Focus RS detected driving situation and driver demand and regulates this optimal torque distribution to each wheel. If the wheel drive is activated, Twin Ster drives the rear wheels faster than the front wheels.

This effect changes the driving characteristics and handling fundamentally. In curves the twin Ster technology allows more agile oversteering and a direct response to the driver's commands. In Ford "Drift mode" distributes the wheel drive system even more torque to the rear axle in order to settle so enough power to the wheels of the RS and to allow a controlled drift through corners.

Other "Torque Vectoring systems" use the brake system for simple vectoring effects, however, which lead to a deceleration of the vehicle. A fully dynamic torque vectoring requires an intelligent drive system, which can transmit the driving wheel-selective moments. Significantly Improve Performance and pure driving pleasure with reduced braking intervention are the result.

Joined Jan 9, 2012
·
5,402 Posts
Developed specifically for the RS. Does that mean our hopes that this would end up in the Continental, and even more importantly in a Hi-Po MKZ won't come to fruition?

Dual Mode, part of the Monroe® Intelligent Suspension portfolio, uses an intelligent valve in the shock absorber that opens or closes to provide firmer damping for increased road holding when desired. The driver can switch between standard or sport settings via a dashboard button depending on ride preference or driving situation. In addition to enhancing driving pleasure, Dual Mode provides an increased feeling of security in the sport setting under challenging road or driving conditions...

Tenneco’s Dual Mode technology will be installed on the front and rear dampers of the Focus RS, production of which is expected to start in late 2015. The high performance road car will be produced in Europe and be available worldwide.

Ford is the first of two global vehicle manufacturers who have chosen Tenneco’s Dual Mode suspension.

Tenneco is displaying these and other ride performance technologies at its exhibit during the 2015 Frankfurt Motor Show, September 15-27, Hall 5.1, Stand A20...

SP1966 said:
Developed specifically for the RS. Does that mean our hopes that this would end up in the Continental, and even more importantly in a Hi-Po MKZ won't come to fruition?
Click to expand...

Meet the (guys) behind the new Ford Focus RS’s revolutionary 4WD system
The new super-Focus is crammed with mini-GT-R tech. But how does it actually work?
TopGear
Ollie Kew
16 Sep 2015

“I was driving around a corner, on constant throttle, constant steering. The engineer in the passenger seat pushed the button on his laptop and the car oversteered. He pushes it again, and it goes straight.”

Meet Peter Moelgg, president of powertrain clever-clogs GKN. His frightening anecdote isn’t one of car-hacking nightmare, but actually a smiling description of how his company has helped set up the new Ford Focus RS. And blessed it with adaptive torque vectoring powers and a super-lively ‘Drift mode’.

The British outfit isn’t a household name like Cosworth or Prodrive (yet), but it’s the GKN chaps that dreamt up the electric axles in the Porsche 918 Spyder. And the BMW i8. Not exactly cars bereft of talent.

“The first car to get our ‘Twinster’ clutch packs was the Range Rover Evoque,” GKN vice-president Ray Kuczera explains. “But since [car makers] have seen the 918 and watched the film of Ken Block drifting the Focus RS, pretty much every major manufacturer has been in touch. Since the Evoque, we have had lots of interest..."

...The beauty of GKN’s clutch system is that, for a small weight penalty, a car can actually ‘vector’, or infinitely juggle torque between each wheel, rather than the more simple cheating way of braking an inside wheel on a corner to load up a mechanical differential.

Using the brakes wears the pads out and, well, brakes the car. It slows you down. The RS, meanwhile, deploys its army of clutches and varies their open/close position, shuffling more power to the wheel that needs it – 100 per cent of the power of that axle to one wheel, if needs be.

In extreme cases, the new Focus RS ..... is more rear-wheel drive than AWD...

...“When Ford came with us for their demands for the car, we knew exactly what it had to deliver,” says Moelgg…

...“Software control is the big thing here,” says Kuczera. Essentially, the physical components from the Focus RS are nigh-on identical to that of an Evoque, or XC90. It’s the computer code, the algorithm that’ll tell that car how to behave, how to manage its power, that differs.

It’s a whole new way of tuning a car’s handling. “We can do a lot with mechanics, but how you computer-control it is really the key. The software gives the vehicle its unique characteristics”...

...“The whole system is designed to be modular.” Crucially, what makes a 350bhp hot hatch fun to chuck around can also help an SUV maintain control when swerving around an accident. “In a rally car, the system could be fantastic,” Moelgg hints.

But surely all those intricate cogs and mechanisms have a pretty low horsepower limit? Not so, apparently.

“Every car, even a supercar, has a threshold when it overheats or needs to come into the pits,” says Kuczera. His company is dead confident that even in a world where hot hatchbacks develop 350-400bhp, his intricate clutches stand a chance of managing the strain.

Could this sort of clutch pack gadget get rid of the traditional limited-slip differential, TG wonders?

“Yes, absolutely,” Ray replies. “We supplied systems like that to the BMW X6 and Lexus LFA. Theoretically, you could have a completely solid rear axle, with independent clutches for each wheel. We’re only at the start of developing this technology. This is really a building block…”

The Ford Focus RS’s Clever AWD System Will Spread Elsewhere (And We Think We’ve Seen It Before)
Car&Driver
February 5, 2015 at 5:11 pm by Mike Duff

...our biggest surprise at the unveiling of the new Focus RS was the car’s extremely clever torque-vectoring all-wheel-drive system, considering the massive costs that must have gone into re-engineering the front-drive Focus to take it.

And although there’s no official confirmation of anything, the Ford execs on hand at the reveal event were happy to drop some very broad hints that we will see the system spread elsewhere among “performance” applications within the group.

“If you look at the thread of the presentation and what we’ve used these fast Fords for in the past, a lot of mainstream technologies that we use today came from these vehicles,” Joe Bakaj, Ford of Europe’s VP of product development told us. “And I can see this as one of those technologies of the future.”

Not that Ford is first to this particular party. The official details of what Ford calls the Focus’s Rear-Drive Unit are almost identical to those of the rear axle “Active Driveline” that Land Rover has recently introduced on higher-performance versions of the Range Rover Evoque. Both use twin electronically controlled clutches on the rear axle to send torque to the back wheels, and both are claimed to be capable of the same neat side-to-side torque-vectoring trick.

Land Rover’s system is made by GKN Driveline in Sweden, with the system being branded as “Twinster.” Ford did say they worked with GKN on the Focus RS, but we don’t know if the RS uses the exact same system or just a similar one—Ford executives refused to say, however nicely we asked them—but in any event it looks like an idea whose time has come.

As with Land Rover, Ford’s twin-clutch rear setup is likely to be the preserve of pricier and more dynamically focused cars; lesser four-wheel-drive Evoques still make do with a single-clutch system upstream of a conventional differential. But it’s not hard to see plenty of interest in Ford products that can deliver both more traction and increased agility. “I think it’s a breakthrough technology that has many opportunities,” Bakaj told us.

Details about the AWD system on the Ford Focus RS has been debated for 2 months, since the day when Ford announced the new model in Detroit auto show.

Recently our friend who is working in Ford told us some design details of the Focus RS AWD system. Before we diving into the detailed analysis, please take a look at the below poster from Ford. 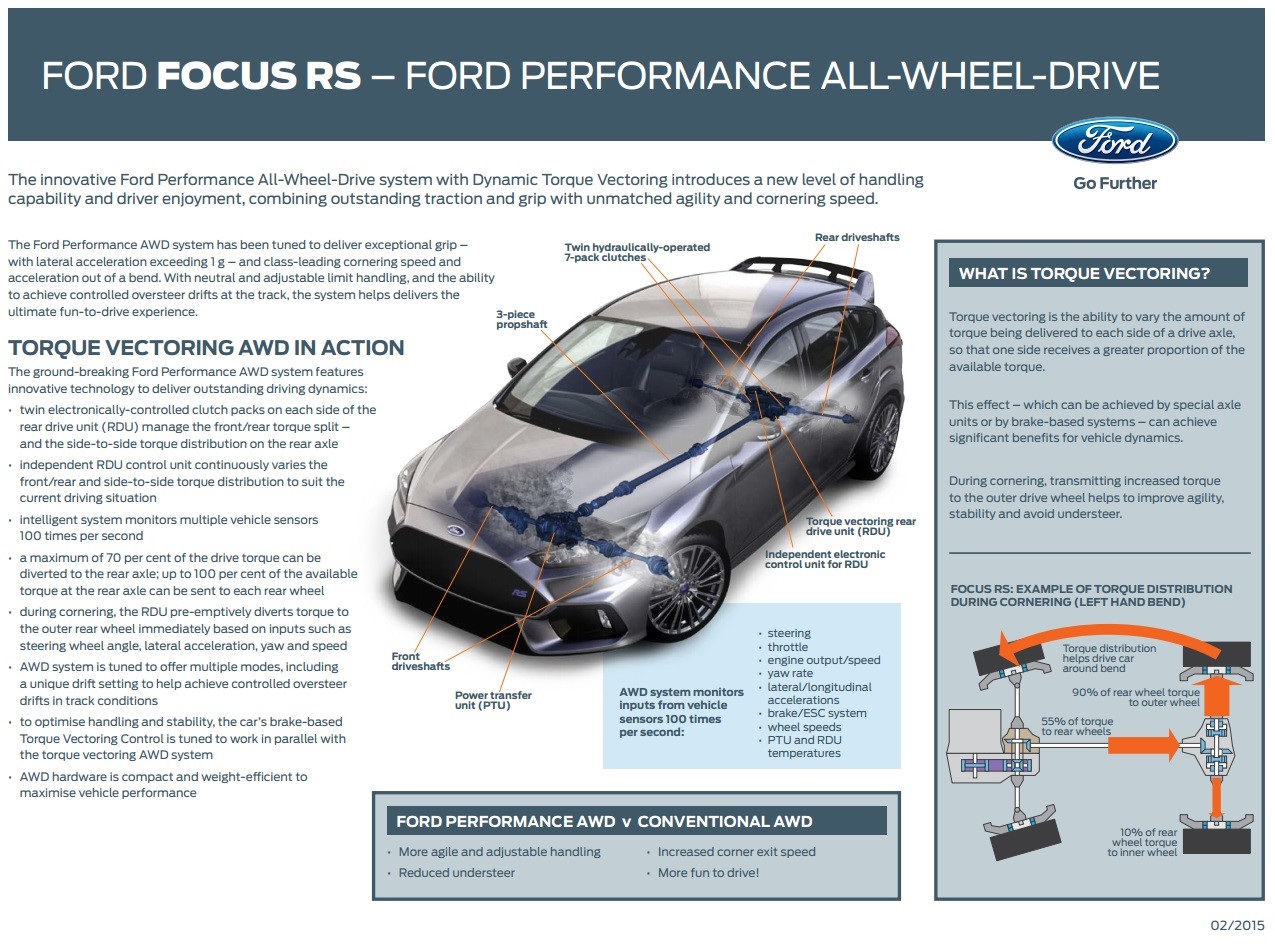 If you are familiar with the Range Rover Evoque, you may notice the above information is somewhat overlapping with the AWD system used on the Evoque, which is supplied by GKN. The Evoque’s AWD system is called “GKN Twinster”.

In fact, GKN has been working with Ford to develop AWD system for the Focus RS, based on the Twinster system. Basically..., the Focus RS AWD system can be categorized as the multi-plate clutch coupling type, it has two clutch packs: one for each rear wheel. In below, I will provide a brief review on this AWD system...
1 - 8 of 8 Posts
Join the discussion
Continue with Facebook
Continue with Google
or sign up with email
About this Discussion
7 Replies
3 Participants
Last post:
2b2 Oct 9, 2015
Ford Inside News
A forum community dedicated to all Ford owners and enthusiasts. Come join the discussion about reviews, news, concepts, industry trends, classifieds, maintenance, and more for all Mazda, Lincoln, Mercury, Mustang, Ford models!
Full Forum Listing
Explore Our Forums
Ford Corporate News Ford Car Discussion General Motors Discussion Suggest A News Article Ford Truck Discussion
Recommended Communities