glyphics said:
How does Lincoln become a global brand? Which came first; the chicken or the egg?

The mindshare that attracts new, aspirational, luxury-market customers has to at least be hinted at by Lincoln before it can grow. Selling "developments" of a few existing Ford models will not push Lincoln forward.
Click to expand...

Developing a wider range of unique future sedan and CUV models can push the brand forward (and into new markets).

If Mercedes was just limited to Germany, UK and China, they probably wouldn't consider models like the AMG Project One hypercar.
B


The decision to use such a small battery enabled the automaker to price the model at $29,990 before incentives but it seemed like an odd choice considering its key rivals offer a significantly longer range. In particular, the entry-level Tesla Model 3 can travel up to 220 miles (354 km) on a single charge while the Chevrolet Bolt can go 238 miles (383 km).

Nissan will correct this shortcoming next year when the automaker will introduce an option for a 60 kWh battery pack. The company didn't say much about the model but Nissan's Executive Vice President of global sales and marketing reportedly told Forbes contributor Bertel Schmitt the car will have a range in excess of 225 miles (360 km).
B

Joined Apr 9, 2013
·
7,893 Posts
^ I think the 60kw Leaf hatchback(which should cost $35k) would be competition for the subcompact Bolt wagon and Iconiq hatch back but not the Model 3 sedan.

Ford will be the sole member of the Detroit 3 present as Europe’s new-car season kicks off at the Frankfurt auto show in Germany this week. Watch for new vehicle unveilings through Tuesday, but keep your expectations manageable.

After years as one of the global auto industry’s can’t-miss events, Frankfurt, also known as the IAA for the initials of its German name, has become pretty darned optional as automakers reconsider their attitudes for new vehicles, and for the whole idea of doing business in Europe.

Ford will reveal an updated version of its EcoSport subcompact SUV that should be nearly identical to the model due for U.S. sale in 2019. Other than a new diesel likely to be a Europe-only feature, the reshaped EcoSport previews likely U.S. features including a turbocharged 1.0-liter Ecoboost three-cylinder engine and Ford’s latest Sync 3 infotainment. The EcoSport’s styling has been tweaked to give it a clear family resemblance to the bigger Escape compact SUV, which Ford calls the Kuga in Europe.

Ford will also be showing the new version of its Fiesta subcompact car, a model that’s a longshot for U.S. sales as American buyers increasingly spurn cars in favor of SUVs.

GM will have just a token presence for Cadillac and Chevrolet, following the sale of its million-vehicle-plus European business to French Peugeot SA.

Fiat Chrysler will skip the show, despite a push to increase Jeep’s European sales and Alfa Romeo’s pledge to introduce several new vehicles in short order.

Nissan, Infiniti, Peugeot, DS and Volvo will also sit out the IAA, an idea that was once unthinkable for brands with global ambitions...

...German automakers remain committed to their home auto show, though. Audi, BMW, Mercedes and Volkswagen will tout plenty of new vehicles and tech... 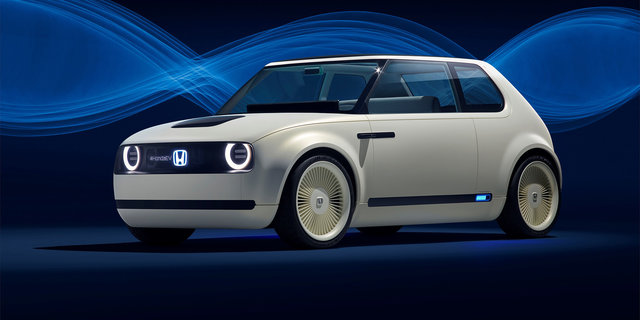 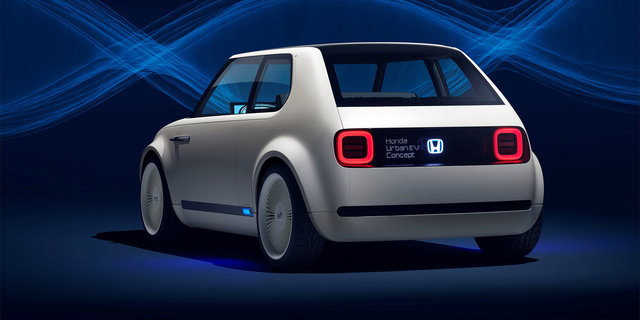 Honda Urban EV Concept: the return of retro(?) design
MotorAuthroity - Brandon Turkus - Sept 12, 2017
11 Live pix
A long time ago, Honda built a car called the City. It was adorable, tiny, and has garnered something of a cult following today. Think of the Honda Urban EV Concept, which debuted Tuesday at the 2017 Frankfurt Motor Show (IAA), as more than a spiritual successor.

The City's inspiration is plain by its name—“urban” is a synonym for “city.” But it goes far beyond just a name. The compact dimensions, round headlights, rectangular grille, and even the hood decal elicit the City's look. An upright tail with square taillights continues the retro trend. We adore these touches.

It's not all retro, we see modern touches too. The blue backlighting in the Honda grille badge is a more tasteful take on the (occasionally disturbing) light-up badge trend. Owners also can program messages to display between the headlights, which…OK. A charge icon sits just above the side sills near the rear wheel arch, while a display between the taillights also displays the charge status. We aren't sure why you would want to broadcast that. As for other modern touches we're digging the huge multi-spoke wheels. They look perfectly natural and surprisingly sporty, and there's more than a little Mk 1 Volkswagen Golf GTI going on in the interaction of the front fender and wheels, too.

The cabin is all business, though. The driver and passengers enter via suicide doors and sit on a pair of benches, where they'll look out on perhaps one of the largest displays fitted to a car. Despite the outrageous nature of the display, we'd expect it to display conventional information related to the infotainment and all-electric powertrain.

Speaking of that powertrain, we don't know a lot about it. There's no information on range, power, or performance, but Honda is talking about its new Power Manager. The technology is debuting alongside the Urban EV Concept in Frankfurt and promises a method for transferring energy between a vehicle, a home, and the broader energy grid. It sounds a lot Tesla's Power Wall and similar systems, which allow owners to store energy generated by renewables and upload it back to the grid.

The best news about this little concept? It's going to see production. According to Honda's president and CEO, Takahiro Hachigo, the company will launch a production version of this car for European markets in 2019. Here's hoping U.S. sales start shortly after, because the Urban EV Concept is too adorable, too intriguing, and has too much personality to not cross the pond.
.

...With a new hybrid powertrain and plenty of orange accents, it adds some additional strange
to the C-HR.

Under the hood is supposedly a new twist on Toyota's gasoline hybrid powertrain, but
thus far the company has offered up no details on it.
What we do know is that this variant of the C-HR Hybrid is supposedly more performance oriented...
.

Joined Mar 31, 2007
·
22,734 Posts
did you know that KIA is using Wookies and Bigfoots for upholstery?
AutoExpress

Joined Mar 31, 2007
·
22,734 Posts
OMG -- I looked at some pix -- not MB cuz I think they're just bordel (french for both a bordello and a freaking mess) but
the X3 is ridiculous
& the i-sedan concept has the worst graphics since Lexoid
= BaroqueMotorWerks... maybe BMJ would be more appropriate
:facepalm:

2b2 said:
did you know that KIA is using Wookies and Bigfoots for upholstery?
AutoExpress

The interior of this Kia Concept is something retro-futurist.. that colored and metal-apparence dash with a modern touch of the screens...is like the cars from the 50´s. The other materials are very cool.. those hairy and strange covers for the seats are very innovative. I love it. And the shooting brake style of the exterior is very interesting.
B

At the Frankfurt Motor Show, VW Group boss said it wants an electric version of every model in its family by 2030 and that includes Porsche. Consequently, the Stuttgart sports car maker is looking at the most advanced battery tech it could use in electric variants of the 911 and Boxster.

Speaking on the matter, Porsche research and development boss Michael Steiner said “Fully electrified sports cars would work very well for longitudinal acceleration but the weight disadvantage is in the handling.
B