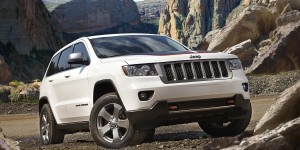 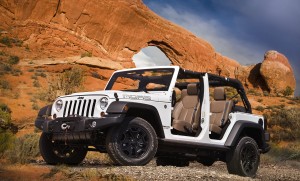 Chrysler’s Jeep division unveiled two new special edition models of the Grand Cherokee and Wrangler, both of which have their collective sights set on pleasing off road enthusiasts who want more capability and ruggedness when out on the beaten path by offering equipment never before offered on a Jeep model.

The first of these models is known as the Jeep Grand Cherokee Trailhawk ... will offer buyers several features such as steel rock rails to protect the body from rock related damage, special 18 inch Goodyear Silent Armor off road tires that resist punctures from sharp rocks and branches thanks to specially designed Kevlar reinforcements as well as an exclusive appearance package...

...The Wrangler Moab, on the other hand, is based on the top-of-the-line Sahara trim, and is available in either two or four door variants. Just like the Jeep Grand Cherokee Trailhawk, the Wrangler Moab also receives a number of unique features and appearance upgrades to set it apart from other Jeep Wrangler models...

...Expect the 2013 Jeep Grand Cherokee Trailhawk and the Jeep Wrangler Moab edition to arrive at a Jeep showroom near you sometime in October, with pricing coming closer to the official launch of the two models.