Joined Jul 7, 2008
·
5,791 Posts
Ford Celebrates Production Launch of the Only Front-Wheel- Drive Hybrid Transmission To Be Made in North America
Ford Media

Ford and suppliers are investing $220 million to transform Van **** Transmission into a modern operation capable of producing Ford’s new hybrid transmission – HF35 – as well as other fuel-efficient transmissions. The investments are part of a $632 million commitment Ford and its suppliers are making to increase capacity and flexibility at three North American transmission facilities by 2015.

The new assembly line and other capacity actions at Van **** Transmission include the addition of 225 new jobs, part of Ford’s commitment to add 12,000 U.S. hourly jobs by 2015. The plant recently added 130 jobs as part of the hybrid transmission launch, with the remaining workers scheduled to start work by the end of the month. Van **** now has a total of 1,350 workers.

“Our investments in Van **** Transmission make it our most advanced, efficient transmission plant in the world,” said Jim Tetreault, vice president of North America Manufacturing. “This demonstrates our commitment to bringing jobs and technology back into Ford and North America – actions that not only benefit our employees but our customers and the communities where we do business.”

Investments at Van **** include manufacturing, capital equipment, launch and engineering costs, and supplier tooling upgrades. New flexible equipment allows the plant to build both HF35 and 6F, a conventional six-speed automatic transmission, at the same time.

HF35 will be used in five electrified vehicles being introduced this year to provide customers with a range of fuel-efficient options:

If I understand the schematic on page 8 correctly, this might have some differences versus the AW Powersplit previously used but a lot of similarities. Difficult to tell. The AW uses a planetary gearset. The ring gear is powered by the traction motor/generator (MG2) which drives the wheels, the planet carrier is powered by the ICE, and the sun gear is connected to a second motor generator (MG1). Here's a really great demo:

If I understand the schematic of the Ford design, it looks it will operate in a very similar manner, although the location of the components might be a bit different? The ICE powers the planet carrier, the smaller motor/generator powers the sun gear. The ring gear is connected to the output via Gear 2; on the same shaft the larger traction motor/generator is connected through Gear 4.

Not sure which components are shared with other Ford transmissions, but probably more in the differential area, since the whole planetary gearset and motors are unique.

Any transmission experts out there to give us more details??
Click to expand...

not that I know what I'm talking about...
but
doesn't that sound something like the Volt? 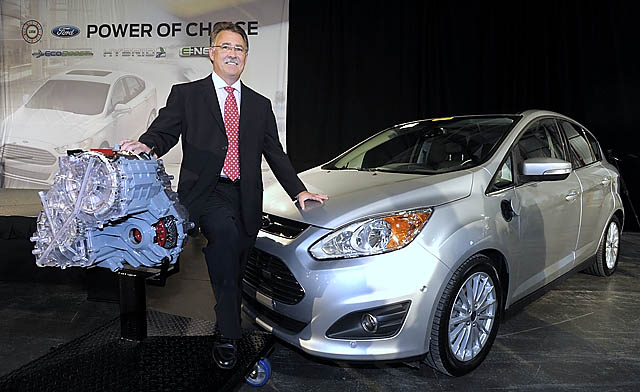 The Dearborn automaker says it is the only front-wheel drive hybrid transmission to be made in North America.

The plant employs about 1,350 workers.

..."We want to be able to respond to whatever the market wants," said Jim Tetreault, vice president of North American manufacturing. Ford can now tailor production of its hybrid transmissions to better meet the demand...

...To show the flexibility of the new transmission lines, workers at the Van **** plant could — although it would be an extreme circumstance — alternate hybrid and six-speed transmission production by simply rotating a pallet on the line.

This process is made simpler by the use of "kits" — toolbox-like containers holding the necessary parts for each transmission.

Those kits are put together at Ford's Rawsonville Plant in Ypsilanti Township, which now handles those duties after taking them over from Mexican and Chinese auto suppliers.

I'm following discussion about this elsewhere
&
Imho
it *could* be a bit like a Volt with different programming.

Imho
it might be rather difficult to get a true comparo since
- Ford fans won't really know Voltec
- GM fans won't really know Ford's system
&
-neither Ford nor GM can be expected to "tell all" nor be objective
1 - 5 of 5 Posts
Join the discussion
Continue with Facebook
Continue with Google
or sign up with email
About this Discussion
4 Replies
3 Participants
Last post:
2b2 Aug 6, 2012
Ford Inside News
A forum community dedicated to all Ford owners and enthusiasts. Come join the discussion about reviews, news, concepts, industry trends, classifieds, maintenance, and more for all Mazda, Lincoln, Mercury, Mustang, Ford models!
Full Forum Listing
Explore Our Forums
Ford Corporate News Ford Car Discussion General Motors Discussion Suggest A News Article Ford Truck Discussion
Recommended Communities