After a long wait, Tesla has finally unveiled the Model 3. It's what we were expecting (and hoping for) – a less-expensive, versatile, attractive 5-seater with decent range and a low price. It rounds out Tesla's revised Secret Master Plan, as Elon Musk cheekily called it, that started with the Roadster, progressed to the Model S, and grew to encompass the Model X.

That's all fine, but did you catch how many preorders Musk said the company had received for the Model 3 by this evening? 115,000 – a staggering number. If you'll remember, each reservation to purchase a Model 3 requires a $1,000 (refundable) deposit.

Here's the other stuff you should really know about Tesla's entry-level electric vehicle. For one, Musk promises it'll ace every safety test category. All will be standard with Autopilot hardware (autonomous driving functionality) and Supercharging (very fast recharging) capability.

It'll also seat five real adults in comfort, as Tesla has squashed the instrument panel a bit and moved the front seats forward to clear rear legroom. To give a sense of airiness to the cabin, and also to gain some extra headroom, it'll have a roof that's a single continuous pane of glass. Neat. In case you surf, it'll swallow a 7-foot surfboard, apparently.

When Musk went over range and acceleration, he made it clear he was talking about the bottom-tier Model 3. Other models, he promised, would go faster and further. As it sits, the "base" Model 3 will get at least 215 miles on a charge and hit 60 mph in less than 6 seconds. "We don't make slow cars," Musk quipped. Musk is fairly confident the Model 3 can be delivered by the end of next year at the $35,000 price point. You are probably aware that new Teslas don't always arrive on schedule, so take the timing with a grain of salt.

How many Model 3s does the company want to sell? Musk seemed confident that he could ramp up both the Californian vehicle assembly plant and the new Gigafactory lithium ion battery facility to produce a total of 500,000 vehicles a year, including the Model 3. That's a very ambitious figure, but considering the number of deposits placed before the car was even revealed, maybe you shouldn't bet against the man.
Click to expand...

But I have to say, that is a lot of interest in this model. Personally, I would still rather have a PHEV that does not limit you to hundreds of miles.
Can’t wait to see what Ford is rolling out, but you can bet it will be competitive.

it's the Reputation/perception that Tesla has BUILT

The car's base price is about $35,000, but it is expected to launch with versions that cost well above that.

Musk is, of course, making some assumptions there, namely about how many of those who placed deposits will actually buy the car when it's ready in 2017 or 2018.

Venture capitalist David Pakman, however, tweeted a different take that still leads to some impressive numbers. If the company books 200,000 preorders and actually sells cars to 70% of those buyers at the lowest-possible price, then it means the company has just locked in $4.9 billion in future sales, with little money spent on marketing.

And regardless of the eventual sell-through, what is already clear is that — with the 200,000 preorders that Musk announced — Tesla has raked in $200 million in interest-free cash... 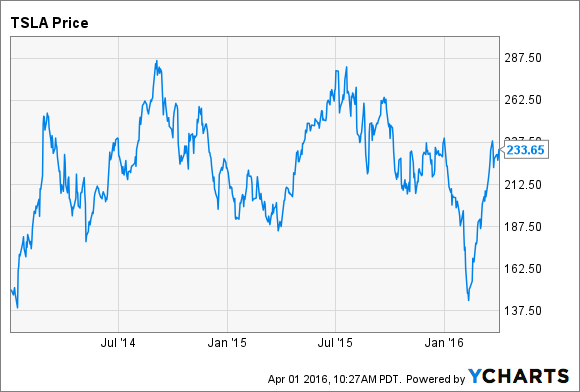 via
Hype Watch: You know the Model 3 doesn't exist yet, right?
LA Times
By Michael Hiltzik - April1, 2016
...
1. Musk's claims about the Model 3's performance and specification may be merely aspirational...

2. Previous Tesla models have been plagued with quality problems...

3. Customers may not be eligible for tax credits. Among the forces behind the acceptance of electric cars are government credits, including an IRS credit of up to $7,500 for Tesla vehicles such as the Model 3. The problem is that those credits start to disappear once a manufacturer has delivered 200,000 electric vehicles. That may well happen before the first Model 3's are placed in customers' hands; given Tesla's production forecasts for its Model X and Model S luxury cars, it's almost certain to happen very soon after Model 3 deliveries start. So calculations that the real list price of the new car is a competitive $27,500 rather than $35,000 may be way off.

4. Competing all-electric vehicles will be reaching the market before the Model 3. Musk and his Tesla evangelism deserve some credit for promoting the electric car as a potential set of wheels for mainstream buyers. But this was more relevant years ago, before legacy American carmakers caught the EV bug. GM, for instance, is poised to start delivering its all-electric Chevy Bolt by the end of this year, with a rated range of more than 200 miles. The Bolt will list at $30,000 after the tax credit, which makes it look a tad more expensive than the Model 3. But according to GM, it will be on the market at least a year earlier.

5. Tesla's financial health is questionable...
B


Bloggin said:
However, if an individual earns less than $35,300, they can get a $4k state rebate, on top of what the fed offers.
Click to expand...

Not all states offer additional incentives, but if you live in one that does..... :surprise2:

It's a good thing for Chevy that the Model 3 will be a couple years behind and likely volume constrained for a while because the Bolt isn't in the same ballpark with this.

wingsnut said:
I heard late 2017 availability.
Is that right?
Click to expand...

That's what I've heard also. Of course that assumes they don't run into the same delays they did with the S and X.
C

Joined Jul 15, 2014
·
280 Posts
It's nice, a little stubby, but overall nice. I love the minimalist interior, less clutter makes for clean lines and a very open feel. However, the Model S is the best overall offering Tesla has at present.

Joined Mar 2, 2007
·
10,941 Posts
Are they serious with that interior?
The dash panel is little more than a counter with a large ipad sticking up in the middle.
Horrible.

Joined Apr 11, 2007
·
1,674 Posts
Purchasing a car like buying a not yet built condo from a developer on Roatan Island seems a weird way to buy a car that has no guarantee of ever making it into production.
Myself I would never consider such a vehicle purchase.
M


MKII said:
Purchasing a car like buying a not yet built condo from a developer on Roatan Island seems a weird way to buy a car that has no guarantee of ever making it into production.
Myself I would never consider such a vehicle purchase.
Click to expand...

&
anyone know (without googling) how many the original Mustang sold in its first 12 months
(&
saw last nite too late to post / not updated this morning...)
enGadget
Teslas Model 3 has already racked up 232,000 pre-orders
edit
forgot to say that IMHO,
that number will prolley be for at least 3 YEARS production
.

&
anyone know (without googling) how many the original Mustang sold in its first 12 months
(&
saw last nite too late to post / not updated this morning...)
enGadget
Teslas Model 3 has already racked up 232,000 pre-orders
edit
forgot to say that IMHO,
that number will prolley be for at least 3 YEARS production
.
Click to expand...

I saw on TV 'news' last nite (Tesla is a local story here in gigafactory-land) that they recently contracted for more "floorspace" in their factory's "area".
Dunno how much of the old NUMMI factory they've been using but my understanding is it's a large plant (former GM/Toyleta joint endeavor) + as I said/implied above, I don't expect Tesla to TRY to build a regular assemblyplant's full/3-shift volume (300k min)

C&D Employee Brings A Magnet To The Tesla 3 Unveiling...
Car & Driver
Aaron Robinson -April 1, 2016
...we don't have a whole lot more details about the Model 3.
Musk says the base model will have a 215-mile range and will accelerate from zero to 60
mph in less than six seconds. There also will be a dual-motor, all-wheel-drive version. He
also promises that it will achieve five-star crash-test ratings and that Autopilot hardware
will be standard. The company is otherwise being very stingy with the details. For
example, it won’t tell us the sizes of the available batteries or what the car is made out of.

The Model S and Model X are primarily aluminum, but that’s an expensive material and,
at the Model 3’s price, a tough cost challenge. Even so, during our brief test ride, we quietly
touched a small magnet to various outer panels, the inner doors, and the structural pillar
between the doors and got not a single quiver of attraction. A Tesla engineer told us the car
is a mix of steel and aluminum but refused to elaborate. Unless the prototypes we sat in
were made from nonproduction materials, there’s not much steel in that body...

I'm wondering if anyone thought about FIBERGLASS?
.
B

I think the Model 3 is about to disrupt the luxury sports sedan segment.

Joined Mar 31, 2007
·
22,734 Posts
I'm re-titling this article:
Why Everything about the Model 3 is WRONG
actual title=
"The Chevy Bolt has one gigantic advantage over the Tesla Model 3"
Yahoo/Business Insider
Matthew DeBord - 7 hours ago

...GM has something else going for it in the coming battle with Tesla.

It doesn't need to make money on the Bolt.

Tesla, by contrast, must make money on the Model 3.


...This sets up a nightmare scenario for Tesla. The Model 3 already looks as if it will be very successful...
...the cruel economics of the auto industry will make the Model 3 Tesla's least profitable vehicle. Of course, it will still have to build the Model 3, and it may even have to carve into Model S and Model X production to bring the Model 3 in on schedule....
1 - 20 of 117 Posts
Join the discussion
Continue with Facebook
Continue with Google
or sign up with email
Recommended Reading
Read More
Read More
About this Discussion
116 Replies
16 Participants
Last post:
falcon lover Feb 21, 2018
Ford Inside News
A forum community dedicated to all Ford owners and enthusiasts. Come join the discussion about reviews, news, concepts, industry trends, classifieds, maintenance, and more for all Mazda, Lincoln, Mercury, Mustang, Ford models!
Full Forum Listing
Explore Our Forums
Ford Motor Company Discussion FIN Headline News Ford Corporate News Ford Car Discussion Ford SUV/Crossover Discussion
Popular Communities