Joined Mar 31, 2007
·
22,734 Posts
Volvo reveals 400-hp twin-charged PHEV power for new XC90 [UPDATE] - Autoblog
By Noah Joseph
Posted Jul 8th 2014
UPDATE: An earlier version of this post indicated that the larger of the conventional diesel engines was a five-cylinder. However all three powertrains announced for the upcoming new XC90 are actually four-cylinder engines. The text has been updated accordingly. 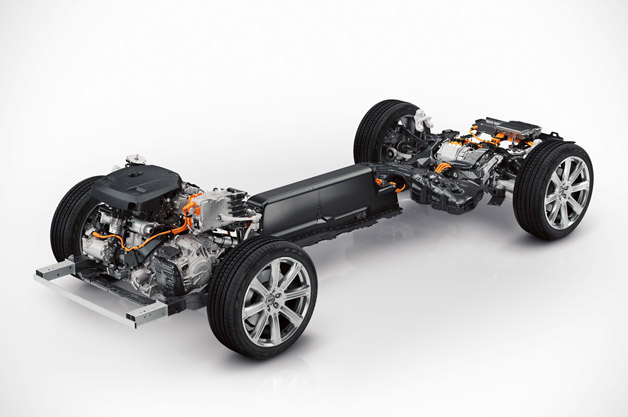 While the previous XC90 was available with a V8 engine furnished by Yamaha, the new model won't be available with eight cylinders. Not even six. No, what Volvo has announced for its new flagship SUV is a highly potent four-cylinder engine that uses every trick in the book to optimize both fuel efficiency and performance.

The top-of-the-line XC90 T8 will employ a 2.0-liter four with both supercharger and turbocharger and mated to a plug-in hybrid assist to deliver a whopping 400 horsepower and 472 pound-feet of torque. The dual-charged Drive-E engine optimizes power delivery across the range and drives the front wheels, while the rear wheels are driven by an 80-hp electric motor for a purely electric range of 25 miles or through-the-road all-wheel drive capabilities.

- All-wheel drive, seven seats and ultra-low emissions of around 60g/km
- Up to 400 hp and 640 Nm of torque
- New Volvo-developed Twin Engine technology

Volvo Cars' all-new XC90 will offer an unrivalled combination of power and clean operation when it is launched later this year. The all-wheel drive seven seater offers drivers up to 400 horsepower but with carbon dioxide (CO2) emissions of around 60 g/km (NEDC driving cycle). There has never been an SUV offering this level of power this cleanly.

"There are no compromises when you drive an all-new XC90," said Peter Mertens, Senior Vice President Research and Development of Volvo Car Group. "In the past you could either have power or low CO2 emissions. But with the all-new XC90 you can have both."

The new XC90 offers a range of Drive-E engine options, all of which provide an outstanding combination of performance and fuel-efficiency. The main distinguishing feature of the Drive-E engine range is that they are all four-cylinder engines.

"With our new Drive-E powertrains, we have created a family of intelligent petrol and diesel engines with power curves that give exciting driveability at the same time as delivering world-beating fuel economy," added Dr. Mertens. "With seven people in the new XC90, carbon dioxide emissions per person and kilometre are outstandingly low."

The CO2 performance of the all-new XC90 will reinforce Volvo Cars' leadership when it comes to bringing more environmentally-sound technologies to market. According to figures monitored by European car industry association ACEA, Volvo Car Group delivered an industry-leading reduction of average fleet emissions by 8.4 per cent from 2012 to 2013.

Volvo has made it possible for a four-cylinder engine to provide all the driving pleasure associated with a much larger engine and do so far more efficiently and cleanly. Drive-E engines will over time be introduced across Volvo's entire range.

For the all-new XC90, the top of the range 'Twin Engine' will carry the badge 'T8' and be a plug-in electric car, hybrid car and high-performance car rolled into one.

Normal driving is conducted in the default hybrid mode. This utilises a two-litre, four-cylinder supercharged and turbocharged Drive-E petrol engine that powers the front wheels and an 80 hp (60 kW) electric motor that drives the rear wheels.

It uses the supercharger to fill in the bottom end of the power range to give the engine a big, naturally-aspirated feel, while the turbocharger kicks in when the airflow builds up. The electric motor on the rear wheels provides immediate torque.

But at the push of a button the driver can switch to quiet and emission-free city driving on pure electric power where the range will be around 25 miles, and then, when needed, immediately revert back to the combined capacity of the petrol engine and electric motor, with its combined output of around 400 hp and 640 Nm of torque.

Full range of other engine options

Not only is there no compromise in terms of performance or efficiency, but Volvo Cars' new Scalable Product Architecture (SPA) chassis technology also allows for far more flexibility inside the car. Other carmakers have struggled to combine the bulk of a battery pack with a luxurious and spacious interior, something that Volvo has managed to overcome.

"Since our new SPA technology is designed from the start to accommodate electrification technologies, the Twin Engine installation does not compromise luggage or passenger space," said Dr. Mertens.


(beside, Mbuku,
this IS a LINCOLN thread )
B


(beside, Mbuku,
this IS a LINCOLN thread )
Click to expand...

They can keep it. In SUV's no one builds em better than Murica. If you are a Ford Fan and must have one of these. I can recommend this

But if you must have the very best Here

But for the money the Chinese will want for that Volvo, you could also go home with this

This is an older thread, you may not receive a response, and could be reviving an old thread. Please consider creating a new thread.